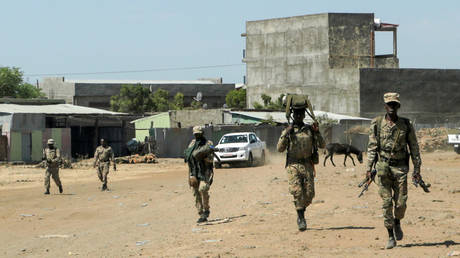 The Ethiopian cities of Bahirdar and Gondar have been rocked by explosions, local and central authorities said, accusing the region of Tigray, which has been targeted by a government offensive, of striking them with rockets.

The explosions, said to be caused by “rocket” strikes, were first reported overnight by Amhara’s communication office.

So far, no information on potential casualties has been provided. No footage of the alleged rocket strikes or their aftermath has emerged yet either.

The allegations were reinforced by Ethiopia’s central government on Saturday, with its emergency taskforce stating that an airport in Gondar sustained heavy damage during the strike. The taskforce blamed the forces of the northern Tigray region for the attack, accusing it of desperately trying to show force in the wake of imminent defeat.

Also on rt.com
Nobel prize winner up to no good? Ethiopia’s PM reshuffles key officials as ‘rebel’region vows to fight until govt ready to talk


Ethiopia has nearly descended into civil war recently following the central government’s decision to launch an offensive against Tigray and its ruling faction, the Tigray People’s Liberation Front (TPLF). The TPLF ruled Ethiopia for years but was forced to step down in 2018 following prolonged unrest that led to current Ethiopian PM Abiy Ahmed assuming power.

While Abiy, a Nobel Peace Prize winner, insisted that the operation against Tigray would be carried out in a “limited” fashion and its goal is only to reestablish the “rule of law” in the region, the fighting has already resulted in hundreds killed. Tigray authorities have accused the central government of launching indiscriminate air strikes that repeatedly hit densely-populated civilian areas.


More than 14,000 civilians have already fled the ‘rebel’ Tigray region for neighboring Sudan, according to the UN refugee agency. More people are expected to flee and the speed of new arrivals is already “overwhelming the current capacity to provide aid,” it added.

Could your second stimulus check be bigger than your first? Yep, but it could be smaller, too