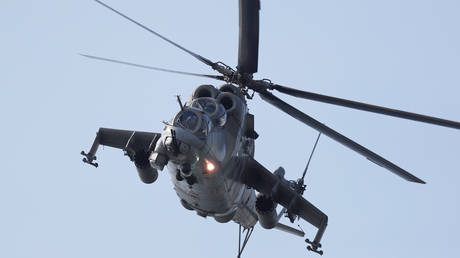 The Russian Mi-24 helicopter crashed in Armenia after being subjected to fire from the ground, Moscow confirmed. The incident took place near the border with Azerbaijan.

The chopper went down on Monday evening as it was escorting a motorcade to the Russian military base. The aircraft was hit by a missile from a portable air-defense system, whereupon it lost control and plunged into mountainous terrain on Armenian soil.

“The Russian Mi-24 helicopter was shot down in the airspace over the territory of the Republic of Armenia outside the combat zone [with Azerbaijan],” stressed the official representative of the Ministry of Defense, Major General Igor Konashenkov.

Two of the helicopter’s flight crew members were killed and one was evacuated with moderate injuries, it has been confirmed. The command of the Russian military base, whose motorcade the Mi-24 was escorting, has launched a probe to establish the attackers’ nationality or any other potential affiliations.

Erevan is willing to provide Moscow with informational aid during the investigation, said the Armenian defense ministry spokesperson.

Also on rt.com
Azerbaijan & Armenia at war: What you need to know about bloody conflict over long-disputed region of Nagorno-Karabakh (MAP)


The incident took place amid the escalation of the conflict between Armenia and Azerbaijan in the long-disputed region of Nagorno-Karabakh, where active hostilities resumed on September 27. Baku and Yerevan accused each other of shelling residential areas. The parties have signed cease-fire agreements three times, but the fighting continues to this day.

The situation is aggravated by the fact that Azerbaijan is actively supported by Turkey, a NATO member, while Armenia is a member of the the Collective Security Treaty Organization – a military alliance with Russia.

Biden's stimulus plan: Here's what's in it including a second check, unemployment benefits