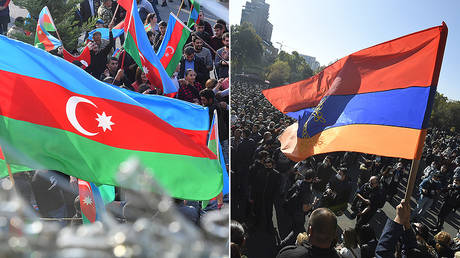 By Fyodor Lukyanov, the editor-in-chief of Russia in Global Affairs, chairman of the Presidium of the Council on Foreign and Defense Policy, and research director of the Valdai International Discussion Club

This week’s surprise Nagorno-Karabakh deal heralds a new approach to settling conflicts, where only players directly affected get a say in their settlement. The Western liberal order no longer controls the direction of the world.

The cessation of hostilities in Nagorno-Karabakh and the adjustments in the future configuration of the region, offered by the peaceful settlement, matter beyond the regional context. It is another example of employing a new conflict resolution model, when only the countries for whom finding balance is vitally important participate in the peace talks. Other players, which are not directly involved in the situation and are only in it for the influence and prestige, don’t get a say.

We all understand why this is important for the South Caucasus. The status quo established after the 1993-1994 war had been maintained here for 26 years. Armenia won that war. The balance of power and international context has drastically shifted since then, but the situation in the conflict zone remained the same.

Diplomatic efforts by Russia and other countries had been largely unsuccessful, because the opposing sides had no real interest in resolving the issue. Both countries claimed to be in the right. Azerbaijan had the moral ground (this is our land), while Armenia used the power argument (we won the war). Add to that the long and complicated history of violence against one another.


The idea that this problem couldn’t be solved through compromise has been prevalent for decades. Therefore, the goal was to make sure the sides didn’t use military force to resolve the conflict. In order to do that, the international community had to monitor the balance of mutual deterrence in the region, so that neither country could hope to win a potential war. For a quarter of a century, this approach worked.

However, the world began to change rapidly in the mid-2010s. It became obvious that the liberal order led by the US and Western countries was no longer capable of controlling international relations. There were several contributing factors: from the growing influence of non-Western players and more complexity in the global balance to the crisis inside the Western world itself.

As the so-called rules-based mechanism began to lose its power and the global institutions, which support the Western order, started to deteriorate, the demands and ambitions of many other countries became more obvious. Predominantly, these countries felt like the Western-led world order restrained their legitimate aspirations.

Thus, a more democratic world emerged. Democratic, not in the sense that there are more democracies, but that different voices are now heard in the international community. We did not see this diversity in the Cold War era, when whatever happened in the international arena was determined by the rules of bipolar confrontation, or immediately after, during the short period of the West’s domination. And in this diverse environment we saw the rise of new powers who were seeking to lead – in the regional context at the very least, and occasionally even at a global level. In the past, their ambition would have been thwarted by superpowers, but that is no longer the case in the 21st century.


What do their general musings have to do with Nagorno-Karabakh? Everything. Turkey emerged as an independent and assertive player. Russia, having recovered after the collapse of the USSR, reclaimed a more confident foreign policy, and started reassessing its priorities in a new reality. Azerbaijan managed to stick to a flexible and relatively neutral course, which allowed it to grow its arsenal through multiple channels. All of the above created opportunities for more variations in how this major regional crisis could develop. Eventually, the balance of opportunities changed so much that it enabled a new military scenario — and with a different outcome. Partly it was because Armenia, for example, hadn’t fully realized the scale of those changes.

After several weeks of fighting, a truce was brokered. What does it mean?

Armenia suffered a heavy defeat, which is bound to have domestic political consequences. It was only Russia’s diplomatic and peace-making efforts that saved it from consequences of a more devastating kind. Armenia and Nagorno-Karabakh managed to avoid the worst-case scenarios, but the wound is deep. Now they have to reflect on what happened and find a way to heal — try it the military way again or opt for a new form of nation-building.

Azerbaijan didn’t get everything it wanted (i.e. to reintegrate Nagorno-Karabakh), but seized control of strategically important areas and evened the score after its defeat in 1994, which had fueled the nation’s insecurities for years. Baku is unlikely to be satisfied with these results forever, but at this point they are celebrating a victory and the taste of it will last for a while.

Turkey scored a win. Not risking a thing, Ankara invested money in equipping Azerbaijan’s army and turned into a major player in the South Caucasus. Under different circumstances, it would not have been able to do so. The partnership-rivalry relations between Russia and Turkey were strengthened through Syria and Libya. It’s a very strange relationship — based not on trust, mutual liking or shared interests, but rather on the understanding that if they oppose each other, neither country can reach its strategic goals. That’s why they have to somehow negotiate and minimize tensions. It’s an extremely confrontational kind of cooperation, but a surprisingly productive one.


Russia’s actions were uncharacteristically elegant. Moscow’s ties with Yerevan strengthened: Armenia now depends on Russia more than it did before the war. Russia’s relationship with Azerbaijan is not ruined either, since Moscow played the role of a useful intermediary rather than solely the enemy’s ally. With Turkey, the relations became more complicated, but proved their effectiveness. In the long term, Turkey’s presence in the Caucasus might lead to certain challenges, but there was no way to avoid that. And Russia’s military presence in this strategically important region has grown, which is a good thing.

What we saw was a kind of a Great Game of the 21st century on a regional level, with moderate losses and relatively low stakes. On a global scale, though, the outcome is more significant. During the Cold War, any regional conflict was part of the rivalry between the two superpowers. No conflict played out without them participating in it in some form or another. After the Cold War, the United States became “the neighbor to every country on Earth” (the expression was introduced by Askar Akayev, former president of Kyrgyzstan). America and its European allies thought that they had to participate in every conflict resolution — directly or through Western-led institutions like the OSCE, the EU, or NATO. It made sense, since the world order was based on the principles of liberal globalization, established by the West.

The peaceful settlement in Nagorno-Karabakh (and before that, the military and diplomatic efforts around Syria and Libya) is an example of a process that only involves those who are directly affected by it, those for whom it is vitally important to find a solution. Indeed, it turns out that in certain cases it is a lot more efficient, as all parties get down to business without dancing around the issue. And they don’t burden the process with too much ideology, which overloaded liberal institutions after the Cold War. This is not the ultimate remedy, of course, but had the conflict resolution in Nagorno-Karabakh continued to rely on the OSCE Minsk Group, nobody would have found a way out of the dark dead end.

There are no illusions or euphoria. Nothing is over. However, there is now a roadmap that seems more realistic in today’s world — harsh and fragmented, but still closely connected.

The statements, views and opinions expressed in this column are solely those of the author and do not necessarily represent those of NY Pilot.

Xbox Series X teardown reveals it's all about cooling