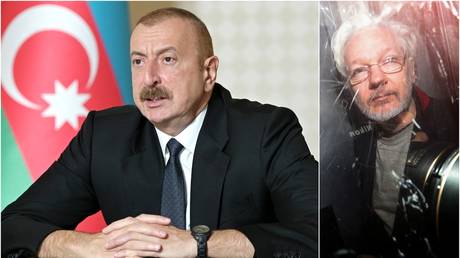 BBC News correspondent Orla Guerin got more than she bargained for when her questioning of President Aliyev about the supposed lack of media freedom in his country ended up with him grilling her on Julian Assange’s imprisonment.

Guerin’s interview with Aliyev on Monday took an unexpected turn when the journalist alleged that the Azerbaijani people lacked access to non-state-sanctioned media and could not enjoy their human rights to the fullest, As evidence, she cited “many independent sources,” but did not name them.

The remark drew an angry rebuke from the president, who said the UK had “no moral right” to “lecture” other nations on the issue of freedom and human rights, particularly in light of the treatment of Julian Assange, who has suffered at the hands of British justice.

“Let’s talk about Assange. How many years [had] he spent in the Ecuadorian Embassy? And for what? And where is he now? For journalistic activity, you kept this person hostage, actually killing him morally and physically. You did it, not us,” Aliyev said.

Assange spent seven years in the embassy in London until the asylum he was granted by Ecuador in 2012 was withdrawn. He was then arrested and transferred to the British capital’s Belmarsh maximum-security prison pending his US extradition trial.

The Wikileaks founder stands accused by the US of various computer crimes, including of aiding former US Army soldier turned whistleblower Chelsea Manning in her leaking of classified military documents in 2010.

Assange had previously also faced sexual assault charges in Sweden, but those have since been dropped. He viewed them as a pretext on which to politically persecute him and a lever by which to extradite him.


His supporters describe the case against him as a major threat to media freedom, and warn that his physical and mental health has seriously deteriorated since his arrest in 2019.

“It is not a question – it is [an] accusation. You talk like a prosecutor. Why? If you are so democratic and so objective, then why [do] you keep Assange in prison?” he said, adding that the West needed to “look [in] the mirror” before “coming and lecturing” others.

Biden's stimulus plan: Here's what's in it including a second check, unemployment benefits