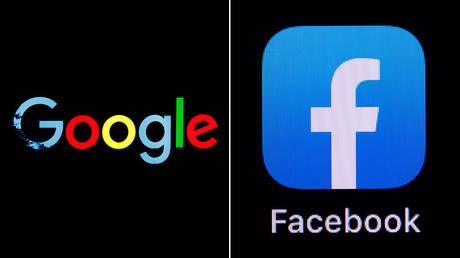 Facebook and Google have extended their bans on political advertising beyond the initially planned one-week period immediately after the US election, as some states continue to tally votes cast in the presidential ballot.

The two tech companies had been set to maintain the ads blackout for one week after polls closed on November 3. But Facebook now says it expects to continue its ban for a month, according to an email it sent out to advertisers on Wednesday.

“Given the ongoing conversation about the US presidential election, we’re continuing to temporarily pause all social issues, electoral or political ads in the US,” the email stated.

Also on rt.com
Parler malfunctions as app favored by conservatives OVERWHELMED by new users fleeing censorship, ranks as most downloaded in US


“While multiple sources have projected a presidential winner, we still believe it’s important to help prevent confusion or abuse on our platform,” it added.

Google did not specify when its advertising policy would change.

News of the ad ban extension comes as some US states continue to count and recheck votes for the presidential election. On Wednesday, Georgia’s top election official announced the state would carry out a recount of all paper ballots.


Reacting to the extension of a ban on political ads, some political commentators claimed that the move could destabilize the runoffs in Georgia, which could determine the overall control of the US Senate.

“With a critical election in less than two months and absentee ballots going out in weeks, this ban cannot stand,” said Terrence Clark, a spokesman for Democratic candidate in Georgia Raphael Warnock who faces Republican Kelly Loeffler.

Could your second stimulus check be bigger if it arrives before the end of 2020?

NASA: Spellbinding Earthshine will make the moon glimmer in November