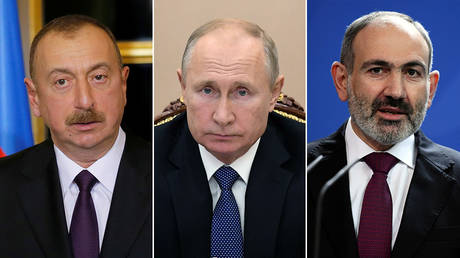 By Paul Robinson, a professor at the University of Ottawa. He writes about Russian and Soviet history, military history, and military ethics.

The Nagorno-Karabakh peace deal amounts to a triumph of Russian diplomacy, miraculously turning a lose-lose mess into win-win. The key now will be to make it stick, as Armenia licks its wounds and a triumphant Azerbaijan gloats.

On Monday morning, things were not looking good for Russia’s position in the southern Caucasus. For several weeks war had been raging between Armenia and Azerbaijan over the breakaway province of Nagorno-Karabakh. Armenia, like Russia, is a member of the Collective Security Treaty Organization, making it in effect Russia’s ally. But Armenia was losing the war, and losing it badly.

Inflicting a crushing blow on Yerevan’s forces, on Sunday Azerbaijan captured the key city of Shusha in southern Nagorno-Karabakh. Its army was said to be approaching the province’s capital, Stepanakert. The morale of Armenian troops was collapsing. A complete Azeri victory appeared likely.


While certainly not catastrophic, the implications of this victory could hardly have been called positive for Russian foreign policy. In the first place, it undermined Russia’s credibility as an ally. And secondly, it threatened to create a dangerous example for other countries in Russia’s near abroad with breakaway regions, such as Georgia and Ukraine. Such an Azeri precedent could perhaps encourage others in the belief that their own problems could similarly be solved by military means.

Allowing Armenia to be completely defeated was not therefore in Russia’s interests. But Russia also has no interest in having poor relations with Azerbaijan, let alone going to war with it. Coming directly to Armenia’s assistance was not, therefore, an option. Even acting as a mediator seemed unlikely to succeed, given that Azerbaijan had no obvious need of mediation. It seemed that Russia was stuck in a lose-lose situation.

And then, out of the blue, on Monday evening, everything changed. Russian president Vladimir Putin announced that he had reached an agreement with his Azeri counterpart Ilham Aliyev and with Armenian Prime Minister Nikol Pashinyan to bring the war to an end. Why the Armenians agreed is clear – their military situation left them little choice. Why the Azeris agreed is less obvious, given that they could probably have gained even more by continuing fighting. But the terms are sufficiently advantageous that it seems likely that they viewed them as too good to pass up.

Prior to the recent war, almost the entirety of Nagorno-Karabakh was outside Azerbaijan’s control, while Armenia also occupied seven adjacent Azerbaijani provinces. During the fighting, the Azeris recaptured the southern section of Karabakh and most of four of those regions. Under the terms of Monday’s agreement, the armed forces of each side will hold in their current positions, but by December 1 Armenia must hand back to Azerbaijan the remaining three districts it still occupies – Lachin, Kalbajar and Agdam.

In effect, the agreement ensures that Azerbaijan will regain all of its territory apart from the northern part of Nagorno-Karabakh. In this way, it can be seen as a decisive Azeri victory.

The agreement does not, however, resolve what will happen with the northern section of Nagorno-Karabakh, which remains under the control of Armenian locals. Reduced to a fraction of its former size, and cut off from outside, what is left of independent Nagorno-Karabakh is hardly a viable unit. Its only connection with Armenia will be a road through what is called the ‘Lachin corridor’. This will be controlled by Russian peacekeepers, who will also monitor the front lines.

Also on rt.com
‘The army said to stop’: Armenian PM Pashinyan claims controversial agreement with Baku was encouraged by his military


By brokering this peace settlement, Russia has saved Karabakh from total capture by Azerbaijan, at least for now. In this way, it can claim that it has done what it can to protect the Armenian population. By persuading the Azeris to allow Russian peacekeepers into the area, it has also guaranteed itself a central role in any final settlement of the issue. At the same time, though, Russia has also kept itself in Azerbaijan’s good graces, by arranging a deal which restores most of the country’s lost territories.

In the West, Russian peacekeepers have acquired something of a reputation as spoilers, helping to freeze conflicts rather than solve them. In this case, they played a positive role, making it possible for Armenia to sign the peace agreement by providing a degree of reassurance.

There remains a danger, though, that the Armenians may exploit the Russians’ presence to renege on the agreement, taking advantage of the ceasefire to recover their energy in the hope that the peacekeepers will then prevent the Azeris from resuming the war. Alternatively, popular resentment in Armenia may lead to premier Nikol Pashinyan’s overthrow or persuade the Armenian parliament to refuse to ratify the agreement. If necessary, Russia will need to engage in some serious behind-the-scenes arm-twisting to prevent this from happening.

The logical next step would then be for Russia to press Armenia to negotiate the terms of autonomy for Nagorno-Karabakh within Azerbaijan. While this would oblige Armenia to abandon its support for Karabakh independence, it would allow the province to regain its unity and permit those who have fled it during the current war to return home.

Armenians may choose to go another route. The peace agreement makes no mention of Nagorno-Karabakh’s future status. It therefore creates the possibility that the rump which remains outside of Azeri control could attempt to continue its independent existence, relying on the Russian peacekeepers for protection.

Meanwhile, Azeri president Ilham Aliyev struck an intransigent note on Monday night. “You probably noticed that this statement contains not a single word about the status of Nagorno-Karabakh,” he said. “When I offered them autonomy, they did not agree, they said no, it is an ‘independent state.’ … Where is the status? The status went to hell, it failed, it was scattered to smithereens, it is not and will not be there. As long as I am president, there will be no status.”

The Russian peacekeeping mission will initially last for five years, at which point either Armenia or Azerbaijan can demand its termination. If the final status of Nagorno-Karabakh isn’t settled by then, one can well imagine that Azerbaijan will ask the Russians to leave and then rapidly finish off the job by military means. While Aliyev’s statement does not bode well for negotiations, Russia has a strong incentive to prevent this, and so to induce both Azerbaijan and Armenia to sit down and talk about Karabakh’s future.

In short, Moscow has good reason to be happy with Monday’s agreement, but one should not imagine that everyone can now sit back and relax. Assuming that the ceasefire sticks for now, Armenia has five years to negotiate a settlement with Azerbaijan. Russia has some tough diplomacy ahead to try and make that happen.

Here's where to buy popular face mask styles for 2020