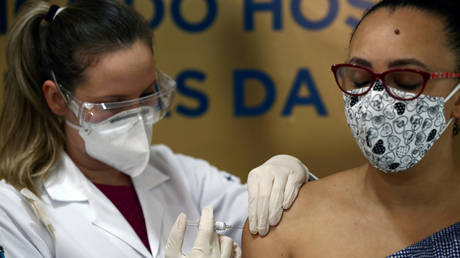 China says that an incident relating to the health of a vaccine trial participant in Brazil is not related to the CoronaVac jab, after the trial was halted on Monday.

Chinese Foreign Ministry’s spokesman, Wang Wenbin, said on Tuesday that the Chinese Covid vaccine being tested in Brazil, CoronaVac, is not responsible for the “serious adverse incident” which was reported by the Brazilian health regulator Anvisa on Monday.

We have noted that Sinovac Biotech has already made a statement. According to the conclusion of a research institute of the Brazilian partner, this incident is not related to the vaccine.

Anvisa said on Monday that it had “ruled to interrupt the clinical trial of the CoronaVac vaccine after a serious adverse incident” on October 29. No further information was disclosed by Anvisa regarding the participant’s condition.

Serious incidents that prompt the suspension of trials include the death of a volunteer, potentially fatal side effects, life changing disability and hospitalization, among other significant developments.

The interruption of the study means that no new volunteer can be vaccinated until the regulator is satisfied that the vaccine was not responsible for the adverse effect experienced by the participant.

Anvisa says it will hold a news conference on Tuesday to provide further information.

The vaccine developed by Beijing biopharmaceutical company, Sinovac Biotech, is in the final stages of testing and has already been used in China to immunize thousands of people as part of an emergency use program.

Trial interruptions are not unusual. In September the US regulator halted the AstraZeneca vaccine trial for seven weeks after a UK participant fell ill with a rare inflammatory condition called transverse myelitis.


The announcement that the CoronaVac trial would be halted on Monday comes as Pfizer and BioNTech said that their vaccine was 90% effective against Covid-19 in the final trial stage.

Pfizer Chairman and CEO, Dr Albert Bourla, called it “a great day for science and humanity.”