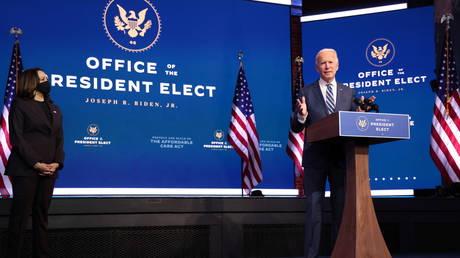 Joe Biden has said President Donald Trump’s accusations of voter fraud and his insistence that he had an election victory are an “embarrassment” and will not “change the dynamic” of his transition plans.

“I think it will not help the president’s legacy,” Biden told reporters about Trump’s refusal to concede at a Tuesday press conference.  “I know from my discussions with foreign leaders thus far, that they are hopeful that the democratic institutions of the United States are viewed strong and endure.”

He added that “it’s all going to come to fruition on January 20,” the date the next president is set to be sworn in. Between now and then, Biden said he hopes the American people accept that there “has been a transition.”

Also on rt.com
Obama official sets off alarms by claiming Biden is already speaking to foreign leaders about agenda as president


While multiple world leaders have acknowledged Biden’s victory, President Trump and other Republicans have refused. The president continues to insist he was victorious on election day and his various lawsuits will expose voter fraud and reverse course in multiple states.

Various Republican lawmakers have also backed Trump’s legal actions, with Sen. Mitch McConnell (R-Kentucky) giving a Monday speech on the Senate floor where he publicly acknowledged no victor in the race and said Trump is “within his rights” to take legal action.

Secretary of State Mike Pompeo even raised alarms on Tuesday when he told reporters there will be a “smooth transition into a second Trump administration.”

Despite the setbacks and an opponent who refuses to concede, Biden told reporters he does not see a need for retaliatory legal action.


“I don’t see a need for legal action, quite frankly,” he said.  “So far there’s no evidence of any of these assertions made by the president or Secretary of State Pompeo.”

The former vice president added that “we are already beginning the transition” and Trump and others’ comments on the election “does not change the dynamic at all and what we’re able to do.”

Part of Biden’s transition, he claimed, has been reaching out to lawmakers to ensure they can work together to provide assistance to people struggling financially due to the pandemic, but the former vice president left people confused with who exactly he’s spoken to.

Asked about working with Speaker of the House Nancy Pelosi (D-California), Biden said he’s spoken to “the leader” and the “minority leader in the House” about bipartisanship and Covid-19 relief. The current House Minority Leader is Rep. Kevin McCarthy (R-California), whose office told Daily Caller reporter Christian Datoc the congressman has not spoken to Biden.

Others have accused Biden of referring to Pelosi as the “minority leader.”

Biden calls Pelosi the “minority leader in the House”

Joe Biden refers to Pelosi by the position she held when he was VP, because his brain is stuck in the past! https://t.co/vzyJVlvtE8

No one can garnish your stimulus check, right? Not true. Here are the rules