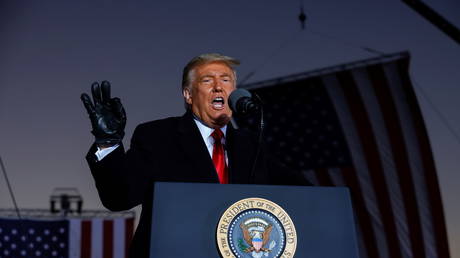 Dr. Brandy X. Lee, who has evaluated the mental state of Donald Trump on CNN and MSNBC, is defending herself against shocked critics after bizarrely comparing and contracting Adolf Hitler and the president.

“Donald Trump is not an Adolf Hitler,” Lee announced on Monday through Twitter, then diving into a rant where she seemingly argued the infamous dictator is more “competent” than Trump.

“At least Hitler improved the daily life of his followers, had discipline, and required more of himself to gain the respect of his followers. Even with the same pathology, there are varying degrees of competence.”

After a wave of criticism, Lee deleted her tweet and then defended herself by saying she was not actually arguing that Hitler is “better” than Trump.

“I see this message has upset people, but it is [a] comment not on better or worse but competence,” she wrote. “Please try to read dispassionately. I have stated several times that Donald Trump is not unique, and neither is Hitler. It is power placed in their hands that is unique.”

She later argued that while one is not better than the other, “low competence can translate to greater dangerousness.”


Few have bought into the defense, however, with Trump supporters instead chalking up the extreme opinion to a case of Trump Derangement Syndrome.

“The liberal left would actually prefer Hitler to Trump because he was more.. erm.. Disciplined. #TrumpDerangementSyndrome,” comedian Abi Roberts tweeted.

You may remember the psychiatrist calling Trump worse than Hitler as the same “expert” seen in the media earlier this year diagnosing POTUS as a “sociopath” pic.twitter.com/zEGMDNzlDq

The doctor has the worst case of TDS I’ve ever seen. Sick stuff.

Lee has continued to defend her tweet, which remains deleted, saying it was meant to show “hot little Donald Trump believes he needs to do to retain his followership,” rather than to minimize “Hitler’s atrocities.”

Okay, I have taken it down, since it has upset so many people and was not provoking thought but the opposite. Of note, my statement was about how little Donald Trump believes he needs to do to retain his followership, NOT to minimize Adolf Hitler’s atrocities.

Lee has not only appeared on MSNBC and CNN, but also reportedly briefed members of the House and Senate in 2017 on the president’s mental state. She stated last month that Trump is a sociopath who “delights in putting people in danger” and “meets criteria for a locked psychiatric facility.”

Also on rt.com
NY Times prompts avalanche of ‘Dick jokes’ after telling people who they’ll vote for based on NAMES sourced from ‘polls’

Election night 2020: How to watch the presidential election returns tomorrow

Do You Market, Or Sell Real Estate?: 3 Things To Consider