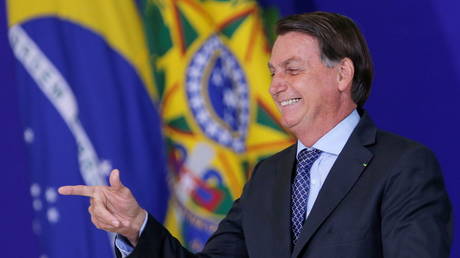 Brazil’s President Jair Bolsonaro has said the severity of the coronavirus pandemic is exaggerated, urging his compatriots to stop being “sissies” in the face of Covid-19 and pointing out that “all of us are going to die one day.”

Speaking on Tuesday at a ceremony to mark the resumption of tourism, Bolsonaro described the Covid-19 pandemic as having been blown out of proportion. The nation’s death toll from the virus has hit 162,000.

He continued by saying that “everything is now a pandemic,” and that Brazil was part of a worldwide wave of “closing things down.”

He tempered his remarks by saying he felt for those who had died, before claiming that he did not know why he was in charge because he hadn’t been allowed to make any decisions regarding the handling of the pandemic. “What we lacked was not a leader, it was letting the leader work,” he emphasized.

The president also said that his life in Brazil is “s**t” and added that “whoever thinks holding this office is a turn-on, is completely wrong.”

Bolsonaro himself contracted Covid-19 in July and said in early August that he had made a full recovery.


Earlier on Tuesday, the president posted on Facebook to hail the halting of the CoronaVac trial in Brazil as “another victory for Jair Bolsonaro.” The president has been very critical of the vaccine because of its links to China, and he previously claimed he would never buy it.

It was reported on Wednesday that the CoronaVac trial would resume in Brazil.

At the end of October, Bolsonaro took a swipe at other state leaders for imposing harsh Covid-19 measures, labelling the new wave of anti-coronavirus lockdowns as “crazy.”

Brazil is currently the world’s third-most afflicted nation with Covid-19, having registered a total of 5,701,283 cases since the start of the pandemic. On Tuesday, the country recorded a further 25,517 infections and 204 new deaths.