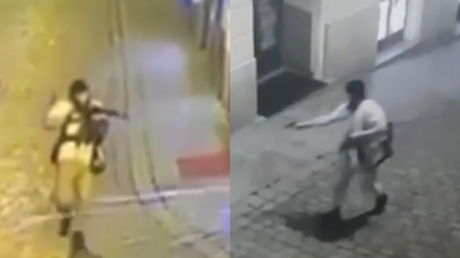 As Austrian police say multiple attackers have taken part in a terrorist shooting in Vienna’s old city, images have emerged of a bearded man dressed in white and using an AK-style assault rifle to shoot at civilians and police.

The yet-unidentified man can be seen in security footage, walking down the cobblestone-lined street before pulling up a rifle and shooting a man in cold blood outside the Stadttempel, a synagogue dating back to the 1820s on Vienna’s Seitenstettengasse on Monday evening.

Local residents also captured the white-clad gunman from their windows above.

A short while later, an identically dressed gunman appears on nearby Schwedenplatz, the plaza along the Danube River, where he is filmed exchanging fire with police officers, injuring at least one.


He can be seen in another video, running away from the officers and past a residential building, as people inside hide from the gunshots.

At least one of the videos captures the man shouting “Allahu akbar,” meaning “God is the greatest,” the Arabic phrase known as ‘Takbir’.

Austrian authorities have said multiple suspects took part in the attack that reportedly claimed at least one life and injured up to 15 people.

How to prevent a hangover