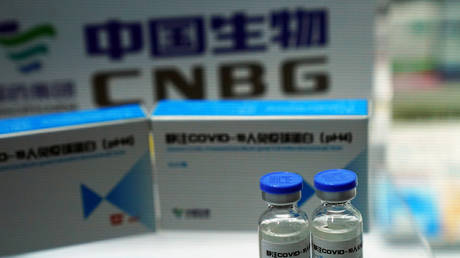 Chinese state-owned pharmaceutical company Sinopharm said on Wednesday that data for its Covid-19 vaccine is performing “better than expected” after it conducted large clinical trials.

Two of the manufacturer’s vaccine candidates have entered phase three clinical trials, during which the safety of a new drug is tested on a large group of people.

More than 50,000 volunteers from 125 nationalities are reported to have participated in the trials, in countries including Argentina, Bahrain, Egypt, Jordan, Morocco, Peru, and the UAE.

Sinopharm announced the progress in a statement on Chinese social media platform WeChat, but it did not offer more details about the data.

The news comes after Russia announced on Monday that over 90 percent of people who had been given its Sputnik V vaccine had developed immunity to coronavirus.


Meanwhile, US drugmaker Pfizer and German partner BioNTech announced on Monday that their two-dose Covid-19 vaccine had proved more than 90 percent effective during phase three trials.

The announcement was based on the “interim analysis” of a study that was similar in size to Sinopharm’s, involving 43,538 people.

Sinopharm previously promised that a two-dose vaccine would be available to the public before the end of 2020, and even released pricing details. “It is expected to cost a few hundred yuan for a shot, and for two shots it should be less than 1,000 yuan [$144],” company chairman Liu Jingzhen said in August.


Last week Liu hinted at the efficacy of Sinopharm’s vaccine, pointing out that of the 99 staff in Chinese telecoms giant Huawei’s Mexico office, the 81 who were inoculated did not contract Covid-19. Meanwhile, he said, 10 unvaccinated employees had contracted Covid-19 in an outbreak at the office.

The World Health Organization (WHO) has reported that 47 coronavirus vaccine candidates are currently being trialed with humans.

'Family Ties' cast discuss whether the show would work now

December 26, 2020
Check Also
Close
Featured Posts
Which One Is Better? Chiminea Or Fire Pit
7 days ago