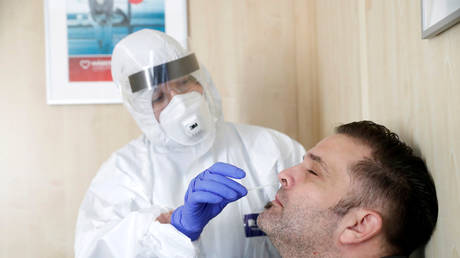 Hungary’s prime minister has warned that hospitals will be overwhelmed unless action is taken to slow the spread of coronavirus in the country, adding that a vaccine is close, but still some weeks away.

Premier Viktor Orban told the public on Monday that new measures are needed to tackle soaring Covid infections in the landlocked European nation.

If the number of people infected increases at such a rate, hospitals will not be able to cope with the burden on them, so the number of illnesses will have to be reduced, mask-wearing is no longer enough. Restrictive measures are needed.

Speaking in a Facebook video, the prime minister said that new measures, similar to those introduced in Austria, will take effect from midnight on Tuesday if the parliament provides the government with the required authority.

The proposed measures include a curfew between 8pm and 5am, restaurant closures and schools moving to online education. The restrictions, effective for at least 30 days, would also see leisure facilities close and a ban on all gatherings, with the exception of family gatherings and funerals.

Orban praised the superhuman work of doctors and nurses but claimed their numbers are finite and that government must act to reduce the pressure on key workers.

He touted the vaccine on Saturday as the solution to the Covid pandemic, suggesting that there wasn’t much more pain to endure.

“It will not be easy, but the vaccine is already within reach, this must be tolerated until then, the elderly, the sick, and the rules must be followed. If we work together, we can succeed together again,” he concluded.

Hungary has placed considerable faith in a vaccination program and, according to foreign Minister for Foreign Affairs Péter Szijjártó, hopes to finalize a deal with Russia for the delivery of the world’s first vaccine, Sputnik V, this week. It is anticipated that the vaccine would be delivered in small quantities from December.


The nation of 10 million people registered a further 5,162 infections and 55 patient deaths on Monday.

How fast could you get a second stimulus check? Our best guess at the timeline now

PSVR on PS5: Everything you need to know