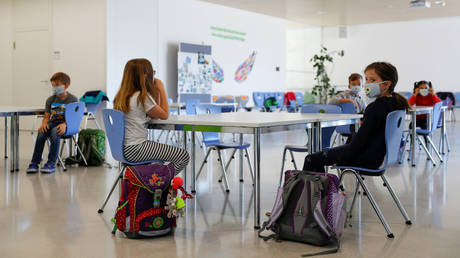 Austria’s interior minister has asked parents in the capital not to send their children to school the day after what the authorities call a “terrorist” attack shook Vienna. One suspect is still on the loose.

“If possible, leave your children at home” on Tuesday, Interior Minister Karl Nehammer told reporters at a press conference shortly after midnight.

Police still don’t know the whereabouts of one of the two suspected attackers, he added.

At least one attacker is on the run.


Nehammer did not provide the exact number of casualties resulting from the attacks that had been reported across six crime scenes in the area around Vienna’s old city. He said only that “several people” died and several have been injured.

The first attack happened around 8 pm local time on Monday, outside the Stadttempel, Vienna’s Jewish synagogue dating back to the 1820s. At least two civilians were killed during the shooting rampage. One of the attackers was taken down by law enforcement.

Nehammer also urged people to stay away from the centre of the city, where the manhunt is underway.

Austria went into a coronavirus lockdown at 12am on Tuesday. The measure was announced on Saturday due to what Austrian Chancellor Sebastian Kurz described as an “exponential increase” in Covid-19 cases in the last few weeks. The restrictions will see a curfew being in effect from 8pm to 6am until November 30th.

As part of the sweeping lockdown measures, students at universities and high schools are switching to distance learning. However, nurseries and other schools are to keep their doors open.

America's next stimulus check: Will yours be larger or smaller when it comes?