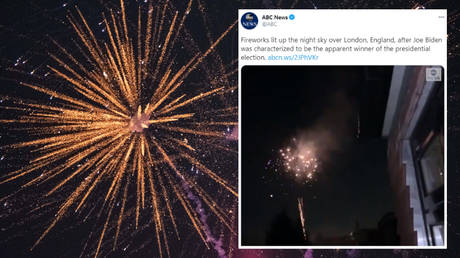 Mainstream American media is so excited about Joe Biden being declared the winner of the US presidential election it even thinks that traditional bonfire night fireworks in the UK are a tribute to the Democrat.

“Fireworks lit up the night sky over London, England, after Joe Biden was characterized to be the apparent winner of the presidential election,” ABC excitedly tweeted on Sunday, as US news outlets basked in the aftermath of Donald Trump’s apparent election defeat.

There’s just one problem with that narrative: it’s complete nonsense. The revellers weren’t toasting Biden’s win, they were celebrating Guy Fawkes night, AKA Bonfire Night. The event marks the anniversary of a failed plot to blow up the Houses of Parliament. It dates all the way back to 1605, long before the USA even existed.

Hey ABC, we do sometimes have things going on ourselves 😆

Between Halloween and Bonfire Night, fireworks can regularly be heard in UK cities throughout much of October and early November.

The footage was originally uploaded by a University College London academic who mistakenly thought the fireworks were Biden-related. ABC got the woman’s permission to use her video and then published it, apparently without doing a shred of fact checking.

Unsurprisingly Brits were quick to point out the embarrassing error and the post racked up thousands of replies. “It’s called Bonfire Night. It’s a UK tradition, dating back to 1605. The skies are generally lit up for a few days before and after November 5th with fireworks. It has nothing to do with Biden winning,” read one terse reply.

Another commenter quipped: “We have been celebrating Biden’s win for decades on this very day – that’s how we roll in future-predicting London.”

Remember that year everyone put up an Obama tree

And today many Brits cooked Roast dinners in honour of Kamala Harris. https://t.co/cx264gzpPj

Hundreds of people branded the tweet “fake news” and numerous others implored the station to remember that there’s a whole world outside America. Even people who weren’t from the UK capital suspected something off about the story.

After many hours of being thoroughly mocked online, ABC deleted the embarrassing tweet but, unfortunately for the network, countless screenshots remained to tell the tale.

ABC wasn’t the only US network caught foolishly trying to claim that Biden’s victory had inspired a wave of celebrations across the world.

CNN also mistakenly reported that a church in Paris was ringing its bells to salute the 77-year-old being declared the victor. This false claim prompted the church itself to issue a statement saying that the bell ringing was a routine exercise and had nothing to do with the US election.

As numerous commenters informed ABC, it’s not always about you, America.

Sorry, not everyone will get a second stimulus payment. What we know right now