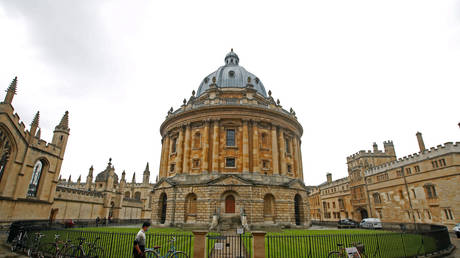 Students in England have been allocated a six-day “travel window” for them to return home after the month-long lockdown. Those testing positive for Covid-19 during the travel window will have to isolate before leaving university.

Universities Minister Michelle Donelan told the BBC Breakfast show on Wednesday morning that the government will introduce a “student travel window” to reduce the risk students pose to their loved ones over the Christmas period.

The travel window will run from December 3, the day after England’s month-long lockdown ends, until December 9.

The Department for Education claims that universities will start working with transport operators and public health teams to plan the staggered exodus of students during the six-day period. Universities may also begin allocating students with travel days.

Also on rt.com
UK’s beleaguered vaccines chief accused of profiting from $65m of taxpayers’ money steered towards her venture firm


Students will be offered rapid result tests on campus with students testing positive made to isolate before returning home to their families at a later date.

Speaking on Sky News, the universities minister said, “we wanted to give students today certainty over Christmas,” adding, “if on the 9 December they test positive, they have long enough to isolate and then get home for Christmas.”

All teaching will also move online from December 9, which means that some students will miss out on timetable placements and practical classes.

Many of the UK’s universities moved classes online over a month ago as the pandemic disproportionally afflicted university students and England’s north.

Jo Grady, general secretary of the University and College Union, criticized the plan, saying, “allowing just a week for around one million students to travel across the country leaves little room for error.”

She added that if the government moved classes online now, it would be possible to stagger the movement of students and protect the health of university staff, students and the wider community.

Also on rt.com
It’s clear that shutting UK schools in the pandemic was a massive mistake that Britain can’t afford to make again


England is currently in the midst of a one-month lockdown which will end on December 2. Covid-19 figures have begun levelling off, with the UK recording 20,412 infections and 532 new deaths on Tuesday, down from 24,141 infections last Thursday when the lockdown began.