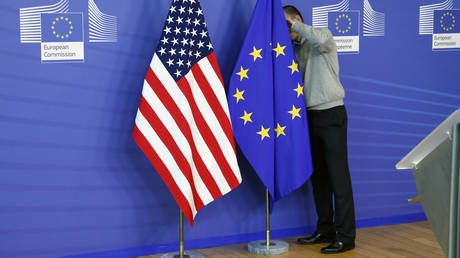 German Chancellor Angela Merkel has said the European Union and the United States should work together on many issues with Joe Biden as the new president, but Europeans should take on more responsibility in the partnership.

Merkel on Monday again congratulated Biden on his projected election, describing him as an experienced leader who knows Germany and Europe well. After the US election, Berlin will stand “side by side” with Washington on issues such as the coronavirus pandemic, climate change, and global terrorism, she stressed.

“We are allies in NATO, we share fundamental values … and interests,” the chancellor said.

However, as an important ally, the US expects Europe “to make stronger efforts to take care of our security and to stand up for our convictions in the world,” she warned. “We Germans and we Europeans know that we have to take on more responsibility in this partnership in the 21st century.”

The friendship between Germany and the US has stood the test of time, according to Merkel, and she sees Transatlantic ties with America as a “treasure that we must preserve.”

Also on rt.com
No, a Joe Biden win wouldn’t spell the end for Brexit or populism…despite what the ‘elite’ try to tell you


Many German politicians have voiced optimism over Biden’s projected win in the US presidential election. Foreign Minister Heiko Maas said on Monday that this could present “many new chances” for co-operation between Germany and the US. The Iran nuclear deal may now be revived, Maas said, referring to President Donald Trump’s move in 2018 to pull out of the treaty.

Maas believes many matters would “get better” for Europe with Biden in the White House. In particular, the issue of NATO spending may not be in focus as much as it was under Trump.

Best gifts for working at home in 2020