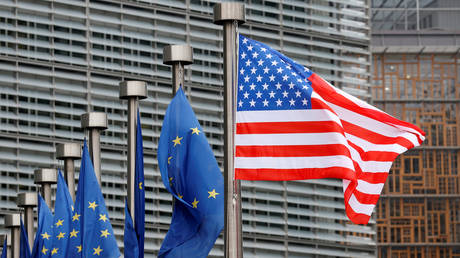 The EU has cautiously welcomed what it called the election “victory” of Joe Biden. Still, any cooperation prospects will be discussed no sooner than he takes office, the bloc added.

The European Union has expressed tacit support for what it described as “the victory in the election of Joe Biden” while stopping short of officially congratulating him on his projected win. Still, it appeared to be in no rush to comment on any future plans on cooperation with its allies across the pond, until at least the presumed winner takes office.

Also on rt.com
EU & US must work side by side, Merkel says, as she again congratulates Biden


“I think we should take things one step at a time,” Eric Mamer, a spokesman for the European Commission, told journalists at a briefing. An “ongoing” process in the US has led the bloc to “welcoming” Biden’s success, he said, adding that developments in America are still at a “very, very early” stage.

“The EU is waiting for the new president-elect to take office before starting to comment on what this will imply when it comes to our relationship,” Mamer said.

Earlier, German Chancellor Angela Merkel once again congratulated the Democratic candidate on his projected victory, expressing her hope that Berlin and Washington would now stand “side by side” on a whole range of issues, from the coronavirus pandemic to climate change. She also called the transatlantic relations “a treasure” and urged for cooperation between the EU and the US under Biden.

Merkel was not the only leader to congratulate Biden early, since that list also includes France’s Emmanuel Macron and the UK’s Boris Johnson as well as some other top politicians from Europe and beyond.


Other world leaders, like Russia’s President Vladimir Putin and China’s Xi Jinping said that they would hold off on congratulations until all the formalities are complete.

Biden’s victory appears to be still neither official nor absolutely certain. The Electoral College is yet to present the formal election results to the Congress in December. President Donald Trump, who has so far ruled out conceding his defeat, plans to challenge the voting results up to the Supreme Court.