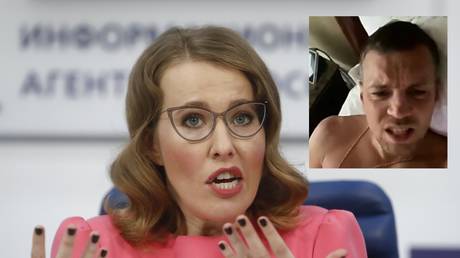 Former Russian presidential candidate Ksenia Sobchak says reactions to the viral video of national team captain Artem Dzyuba is reminiscent of Soviet attitudes toward sex and emphasized that everyone masturbates “how they want”.

Journalist and TV news anchor Sobchak, who ran against Vladimir Putin in the 2018 Russian presidential elections and won 1.68% of the vote, issued a mock-up poster of solidarity with the Russia skipper on Instagram to her 7.9 million followers, the social media site on which Dzyuba subsequently turned off all replies to his account after the clip gathered attention over the weekend.

READ MORE: HACKED: Russia star Dzyuba ‘was ready for X-rated video to be leaked’ after phone was accessed – reports

Expressing her bemusement at her earlier post being allegedly taken down due to complaints, Sobchak wrote: “Instagram has deleted my video for some reason, because they received complaints. The world is fucking crazy. No one has a sense of humor.”

Sobchak went on to reference the hysteria which greeted a scandal last month involving The New Yorker journalist Jeffrey Toobin, who was suspended after exposing himself on a Zoom call, and how it was perceived largely as an overreaction in Russia.


“What is that all about? Do you realize at all how new etiquette standards are becoming telling and stinking standards of the USSR? Where at the Communist Party meeting they could admonish someone for obscenity. Everyone masturbates how they want! It is unacceptable to make professional dependent on personal.”

The 39-year-old signed off her rant with two phrases, the first “everyone masturbates how they please”, an expletive Russian proverb which translates roughly as “to each his own” or “everyone does things their own way”, and the second a famous line framing the apparently secretive attitude toward sexual intercourse in the Soviet Union.

“A person could be an asshole, but if he is gifted he should engage in self-realization. Don’t like how he does things? Don’t live with him. Or is it no sex in the USSR?” she wrote.

Dzyuba was dropped from the Russian national team for two UEFA Nations League matches against Turkey and Serbia and a friendly against Moldova this month due to the incident, manager Stanislav Cherchesov explaining his decision as removing an “unnecessary negative” from the squad.

The striker was also relieved of the captain’s armband for his club side Zenit St. Petersburg’s home match against Krasnodar, in which he missed a penalty but then recovered to score to put his team ahead in a come-from-behind 3-1 victory.

I Found Financial Religion During Covid With The Savings Ritual