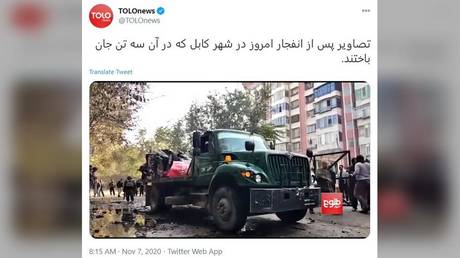 A magnetic bomb attached to a car owned by the Central Bank of Afghanistan has killed three people inside the vehicle, including a former host of political shows on TOLO News television.

The bombing happened on Saturday morning in the Makrorayan-e-Char area of Afghanistan’s capital Kabul near the home of former TOLO News anchor Yama Siawash. Police said three civilians were killed by the explosion and that all the victims were employees of the Central Bank of Afghanistan.

Siawash’s brother, former Afghan MP Baktash Siavash, confirmed that the ex-journalist was among those killed. He and his father were reportedly the first people at the site of the blast.

Presidential spokesman Sediq Sediqqi condemns attack on former TOLOnews presenter Yama Siawash, who was a Central Bank employee and was killed in an explosion in Kabul on Saturday morning. Sediqqi says Siawash was one of the most talented presenters in the country. pic.twitter.com/1x7GrdxpfQ

The apparent assassination was condemned by Afghan and international journalists, organizations and officials. A government spokesman has called Siawash one of the most talented presenters in the country. He hosted political programs on TOLO TV before moving on with his career.

A new shock for 🇦🇫 to whom the voice and face of Yama Siawash, the former @TOLOnews political journalist and a #DaAfghanistanBank employee, were familiar. He and others were brutally murdered today. We express our condolences to their loved ones and support to the Afghan people.

No party immediately claimed responsibility for the bombing. Police have yet to establish a possible motive for the attack.