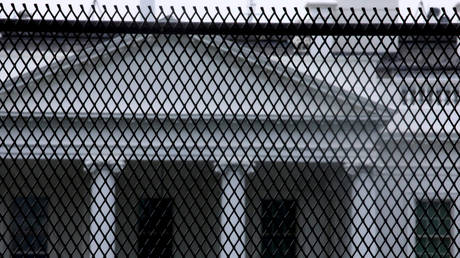 US authorities are to boost security at the White House with a new fence which will encircle the entire complex. The move was deemed necessary due to fears of possible mass unrest over election results.

The fence was described by sources as “non-scalable”, NBC News’ Geoff Bennett reported. It will encompass the Ellipse and Lafayette Square, he said, adding that in addition, 250 national guardsmen reporting to Metro police will be on standby to respond to any unrest. CNN confirmed the news.

The White House on lockdown: A federal law enforcement source tells NBC that beginning tomorrow, crews will build a “non-scalable” fence to secure the WH complex, Ellipse and Lafayette Square.250 National Guardsmen have been put on standby, reporting to Metro Police officials.

The security boost is in preparation for election day and mass protests and rioting that may follow, especially if the outcome is not immediately certain. Many business owners in large US cities, including Washington DC, have similarly pessimistic expectations and have been boarding up their shops against possible vandalism and looting.

Also on rt.com
Trouble ahead? Stores boarded up across US over fears of widespread looting and riots around election (PHOTOS)


The White House used additional barriers earlier this year when mass protests were happening near the complex in the wake of the police killing of George Floyd in Minnesota. Lafayette Park, a popular protest spot, was forcefully cleared of demonstrators and kept largely fenced off during the height of the protests.