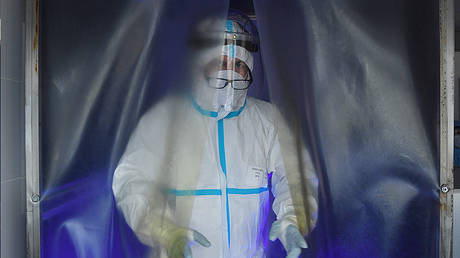 As the world’s first registered formula, Sputnik V has been touted as a pioneering breakthrough.

The first three infections were reported on Wednesday in the Altai Region, near the border with Kazakhstan. According to the chief infectious disease specialist in the region, they caught Covid-19 after being vaccinated, but before immunity had fully formed. The scientists behind the jab say that after receiving the vaccine, it takes some time to develop antibodies against the virus. In the case of Sputnik V, full immunity is not expected to form until a patient receives a booster shot, 21 days after the first injection.


The fourth infection was reported in the Kemerovo region. The deputy head of the regional health ministry says the doctor tested positive five or six days after receiving the shot.

Speaking to local news website amic.ru, about the case of the three infected doctors, the Altai region’s chief epidemiologist Irina Pereladova suggested another cause of the illness. According to her, 42 inoculated Altai health workers tested negative for the virus a day before the vaccination. Therefore, the three may have caught the virus in the time between they tested negative and when they received the vaccine.

On Wednesday, the developers of Sputnik V announced that their vaccine was 92% effective and causes no serious side effects. The statistic comes after observing 16,000 volunteers, with the results suggesting that the vaccine protests over 9 out of 10 people.

On August 11, Russian President Vladimir Putin announced that the country had registered the world’s first Covid-19 vaccine, developed by the Gamaleya Institute for Epidemiology and Microbiology. The vaccine has been criticized by some Western countries for supposed unsafe rapid development and improper testing. Sputnik V is currently going through phase three trials involving 40,000 volunteers, a quarter of whom will receive a placebo.

Stimulus check qualifications may be different this time. What to know now