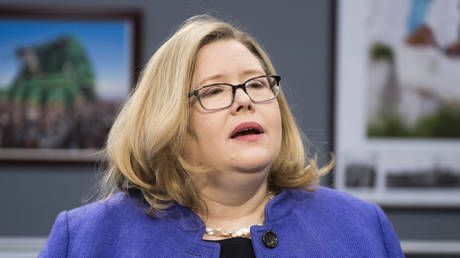 A Donald Trump-appointed official came under attack for not initiating the formal transition to a Joe Biden administration the weekend after the election, despite legal challenges to the results that were declared by the media.

The administrator of the General Services Administration (GSA) is required by law to sign the papers that officially declare an “apparent” winning ticket the president-elect and the vice-president-elect, which hands government funding to their transition team.

Under the Presidential Transition Act of 1963, a candidate becomes “President-Elect” (for purposes of the transition rules) when the GSA Administrator ascertains that it’s “apparent” that they’ve won an electoral college majority.https://t.co/yJVqM6bd45Methinks we’re there. pic.twitter.com/2JHAHLpKs4

Emily Murphy, appointed to the position by Trump, has not signed such papers, as official results are yet to come, despite major American media outlets declaring Biden and Kamala Harris the projected winners of the presidential election.

Murphy’s inaction has largely been interpreted as a refusal by various anti-Trump elements, with the Washington Post penning a story on Murphy titled “A little-known Trump appointee is in charge of handing transition resources to Biden — and she isn’t budging.”

Despite the catchy headline, the article featured no comment from Murphy on her stance on “budging” or not. However, WaPo did have an actual explanation from a GSA spokesperson Pamela Pennington, who said that “an ascertainment has not yet been made” with regards to declaring the election winners.


Pennington was likely referencing the upcoming legal challenges to the results which Trump announced throughout last week. The Washington Post seems to have inadvertently driven the exact same point home, by mentioning similar GSA indecision in 2000, when Al Gore and George W Bush brought an election dispute before the Supreme Court.

Despite all that, the general discontent with Murphy not immediately complying with mainstream media narratives spawned an all-out attack on both her and the GSA online, with commenters uniting under hashtags #TimeToTransition and #DoYourJobEmily.

Critics have even gone so far as to edit the GSA’s Wikipedia page, calling it a “politically-manipulated,”“formerly independent” agency of the US government.

Twitter users have accused the official of “refusing” to allow a “peaceful transition of power” and even “hating democracy.”

Why do you hate democracy, Emily? YOU ARE A DISGRACE!

Hey EVERYONE- I just wanted to make u all aware of a brewing SCANDAL involving this one here > @GSAEmily Apparently she’s refusing to sign off on the transition releasing funds to allow the Biden Admin to get to work-and TRANSITION. She is SUPPOSED to be working 4 US-not DT

Despite all the over-the-top accusations and a level of uncertainty in the seemingly final election results, Murphy has not commented on the situation.