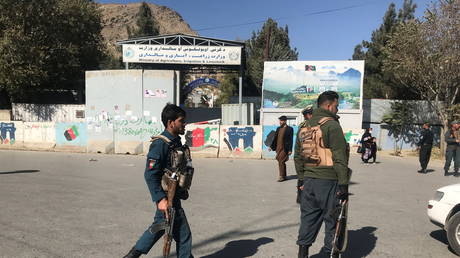 An explosion and gunfire were reported at Kabul University in Afghanistan on Monday morning, hours after a bomb went off in the city.

Sources told the local TOLOnews channel there were three attackers. According to the report, an explosion and gunfire occurred when Afghan and Iranian officials were formally opening a book exhibition.

The outlet posted photos of students being evacuated from the campus.

A video from the scene shows people hastily walking down the street and then fleeing in panic as loud bangs are heard.

A convoy of armored vehicles, which local media said belonged to “foreign forces,” was filmed moving towards Kabul.

A Health Ministry spokesperson told 1TV that four people, including a lecturer at the university, had been hospitalized.

No militant group, including the Taliban, has as yet claimed  responsibility for the attack.

Earlier in the morning, a bomb exploded in Kabul, wounding a security serviceman and a civilian.

Last week, an SUV rigged with explosives was blown up in a different part of the city, injuring three civilians.

In September, the UN envoy for Afghanistan, Deborah Lyons, warned about the “near-record violence” that was taking place across the country, the talks between the Taliban and the Western-backed government in Kabul having stalled.

Why Business Cards Are Useful To Musicians