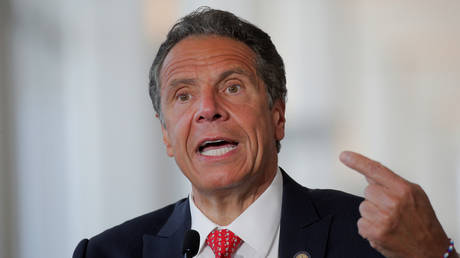 In an interview with radio host Howard Stern, New York Governor Andrew Cuomo claimed he would have punched President Donald Trump over the last few years, had he not held the high office.

Cuomo’s boasting about hypothetical violence came in response to a discussion about the president referring to his brother, CNN host Chris Cuomo, as “Fredo,” a reference to a character in the mafia film ‘The Godfather.’

“The Mafia stereotype has been such a stain on Italians for so long, and that’s where they go,” Cuomo said about the attack on his brother, who also called the reference discriminatory.


Cuomo doubled down on the fantasy of punching Trump later, saying he was forced to be diplomatic with the president, especially at the height of the Covid-19 pandemic.

“Take away that word governor for 24 hours, I would have had a field day with him,” he said.

Cuomo’s comments have mostly earned him pushback, but not for threats of violence, but rather for his controversial leadership as governor during the pandemic, with critics reminding him of a controversial order forcing nursing homes to accept positive Covid-19 cases (which many say led to thousands of deaths), as well as his highly-criticized shutdown ordinances in New York.

The governor’s comments come in the wake of his recently threatening to help “stop” the Trump administration from distributing a Covid-19 vaccine, saying he would trust a Biden administration to do so much better.

Second stimulus check: The soonest the IRS could send it before the end of 2020

How to watch the Lil Nas X virtual concert in Roblox