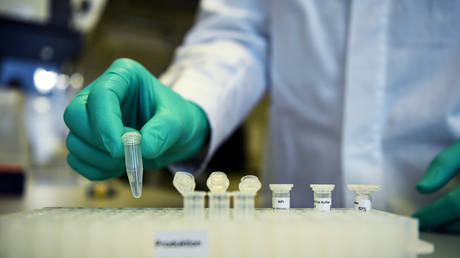 Iran’s deputy health minister has warned of the public health impact caused by US sanctions, as the government tries to import vital flu jabs to vaccinate vulnerable people ahead of the winter months.

Harirchi said “five million doses of purchased flu vaccine have been blocked at an airport due to the sanctions against Iran and they cannot be cleared and exported to the country.”

As a result, Iran has not yet distributed the flu vaccine to pharmacies and is unsure whether it will be available moving forward. Harirchi sought to alleviate any fears by suggesting that Covid-19 restrictions should greatly reduce the risk of catching flu this year.

Also on rt.com
Iran’s policy towards US won’t be affected by who wins election – Khamenei


In October, Alireza Wahhabzadeh, an adviser to Iran’s health minister, said Tehran had attempted to make deals with pharmaceutical companies in three countries in an effort to obtain a flu vaccine.

However, after being informed that the vaccines were destined for Iran, all three companies called off the deal and returned the payment.

“So, we were forced to go to a fourth country, and this has, hence, caused a delay and undermined our efforts to have the supply of the needed doses secured.” Wahhabzadeh said.

Iran’s struggle to access these important medical supplies is further evidence of the impact of US sanctions on the Iranian people.

These events also raise questions about Iran’s ability to access to Covid-19 vaccines developed around the world. However, Tehran announced in late October that it would be launching human trials for an indigenous coronavirus vaccine and has already joined the World Health Organization’s COVAX program.