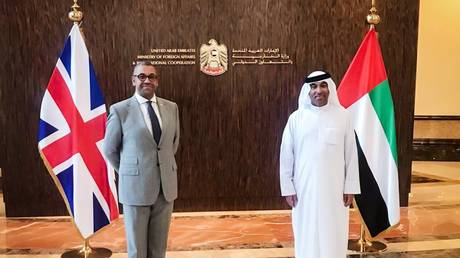 The UK embassy in Abu Dhabi has been mocked online over a photo op-turned-photo gaffe, as many on social media noticed the British flag on the image released by diplomats was conspicuously lacking a key part: St. Patrick’s cross.

The embassy’s Twitter page reported a visit by James Cleverly, UK minister of state for the Middle East and North Africa, to the UAE, on Tuesday. The post focused on Cleverly’s meeting with the head of the Abu Dhabi Global Market and top state official, Ahmed Al Sayegh. The tweet also featured a photo of both men standing against the background of their respective national flags.

However, it was not the nature of the meeting and potential “trade, investment and economic diversification” the two officials discussed that drew public attention to the publication. Instead, people were quick to notice the Union Jack on the photo was definitely missing something – namely Saint Patrick’s Saltire, representing Northern Ireland’s place in the UK.

People on social media wondered whether it was just some really outdated version of the flag or a subtle sign of some future geopolitical developments.

I know the Tories were openly shafting Northern Ireland, but is this a subtle announcement?

While some sought to hint to UK officials that such a flag lost its edge more than 200 years ago, others joked it was simply next year’s version “released early” and an indication of Northern Ireland leaving the union in the near future – and possibly joining the Republic of Ireland, for good measure.

Pst, James. That flag ceased to be valid in 1801.Plank

Maybe it’s not out of date, just next year’s version released early.

It is the 2021 flag, after reunification.

Others just questioned the professionalism of the British diplomats who failed to spot the crucial mistake either during the photo-taking or when the image was published.

The quality of the UK diplomatic service is shockingly low. How could no spotted the mistake AND let the minister be photographed in front of it AND tweeted it on official twitter?

I’m keen to understand how you can get the flag wrong and stick it up, then picture and publicise such an error?

It appears, however, that the embassy staff still have not discovered the error as they neither removed the photo nor have reacted to the online comments.