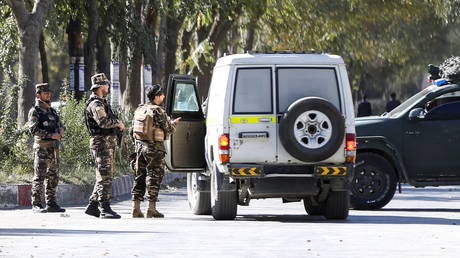 The Islamic State (IS, formerly ISIS) terrorist group has claimed responsibility for an attack on Kabul University on Monday in which at least 22 people died, including students, after gunmen stormed the campus.

The group’s Amaq News Agency sent out a message claiming Islamic State had carried out the attack and had targeted judges, investigators, and security teams working for the government. It claimed 80 people had been killed in the incident.

The official number of those killed stands at 22, however, with more than 20 other people wounded.

Shots were first heard at around 11.30am local time, before an hours-long battle between the attackers and Afghan security forces. The three perpetrators were killed, according to the country’s interior ministry spokesperson Tariq Arian, who described the assault on the university as a “savage terrorist attack.”


President Ashraf Ghani branded the violence an attack on “the honor, advancement, and bright future of Afghanistan,” and the Afghan government has declared Tuesday a national day of mourning.

Local media reports said there had been an explosion and gunfire at a book fair at the university, which had been attended by Afghan and Iranian officials, including the Iranian ambassador to Afghanistan. Footage showed students being evacuated from the campus, and people could be seen running, to the backdrop of loud bangs.

One student, Fathullah Moradi, who escaped through the university’s gates, told Reuters: “They were shooting at every student they saw.”

Islamic State also claimed responsibility for a bomb attack at a Kabul education center just over a week ago that killed 24 people.

Bloodshed has continued in the country, despite recent peace talks between the Taliban and the government, with the UN envoy for Afghanistan, Deborah Lyons, warning of “near-record violence.”

On Monday, in a separate incident, a vehicle struck a roadside mine in Afghanistan’s Helmand province, killing at least seven people.