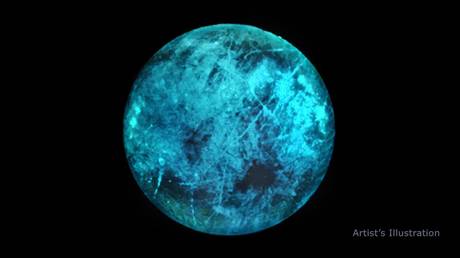 Research from NASA’s Jet Propulsion Laboratory (JPL) has found that Jupiter’s icy moon Europa glows in the dark and could literally shed light on the chemical composition of its vast oceans, and the possibility of supporting life.

Jupiter irradiates its satellites night and day with a constant bombardment of electrons and other particles.

The salty compounds contained within the moon’s surface ice react to radiation differently, emitting their own particular glow: green, blue or white with varying degrees of intensity depending on the composition of the particular irradiated compound.

A moon that ‘glows’ in the night sky doesn’t exactly sound that remarkable because our moon continues reflecting the sun’s light at night time, so we’re used to the sight, but the underlying mechanism behind Europa’s glow is much different, as even its dark side which faces away from the sun emits light.

While at first glance, it might seem like a curious but unimportant quirk of a moon in our solar system, the discovery may in fact provide clues about the ocean beneath and whether it can indeed support life, as some in the scientific community suspect.


JPL scientists used a spectrometer to compare the wavelengths of the emitted light from the moon to gain insights into the specific compounds within the ice responsible for each particular hue.

This type of analysis is typically done during the day but the latest results showcase what Europa would look like in the dark.

“We were able to predict that this nightside ice glow could provide additional information on Europa’s surface composition. How that composition varies could give us clues about whether Europa harbors conditions suitable for life,”said JPL’s Murthy Gudipati, lead author

NASA scientists have long inferred that Europa’s icy surface is likely made up of a mixture of ice and salts that would be familiar to us here on Earth, like magnesium sulfate (Epsom salt) and sodium chloride (table salt).

The team then built a unique instrument called an Ice Chamber for Europa’s High-Energy Electron and Radiation Environment Testing (ICE-HEANY Pilot) to create a mock-up of the icy moon’s surface which they then blasted with a high-energy electron beam to see how organic material beneath its would handle intense bursts of radiation.


It remains to be seen if there is indeed anything swimming beneath the ice but one upcoming mission may provide some unexpected assistance in this regard.

NASA’s Europa Clipper mission will conduct multiple flybys of the glowing moon in the mid-2020s and members of the mission team are already poring over the JPL researchers’ findings to determine what level of overlap there is between their work.

While Clipper is not specifically a life-detecting mission, it may end up providing invaluable reconnaissance data which improves our search for life out in the universe.

Clipper might allow researchers to compare their findings from the mock-up here on Earth with more accurate readings taken in close proximity to the moon located some 628.3 million kilometers away.

The spacecraft measurements could afford much greater insights into the composition of the moon, and the possibility of life in its cold waters.

PS5 and Xbox Series X backward compatibility: Everything we know