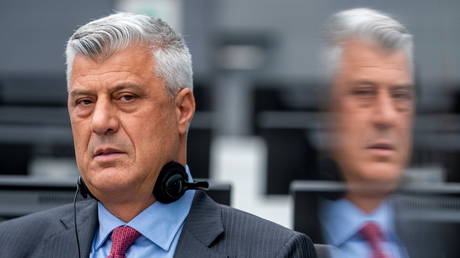 Former president of Kosovo Hashim Thaci has pleaded not guilty to crimes against humanity and war crimes, in his first appearance at The Hague, where he has been indicted on 10 counts for charges dating back to the 1990s.

Thaci is rejecting all the charges, which relate to crimes alleged to have occurred during the Kosovo War of Independence between 1998 and 1999, and during which some 13,000 people died.

The 52-year-old resigned as leader of the Balkan state on Thursday in order to stand trial, after being indicted by the Specialist Prosecutor’s Office in June over his alleged role in almost 100 murders.

He was then flown from Kosovo’s capital Pristina to the Netherlands by military plane and held at the Kosovo Specialist Chambers (KSC).


He told the judge on Monday: “Your honor, the indictment is completely without basis and I plead not guilty.”

Thaci was the former leader of the Kosovo Liberation Army (KLA), an ethnically Albanian guerrilla group, which fought Serbian control and sought to separate Kosovo from Yugoslavia and Serbia.

The four men are indicted on 10 counts and are accused of having “shared the common purpose to gain and exercise control over all of Kosovo by means including unlawfully intimidating, mistreating, committing violence against, and removing those deemed to be opponents.”

The indictment also claims that the men were jointly involved in “inhumane acts,” including “cruel treatment, torture, murder, and enforced disappearance of persons.”

Krasniqi, 69, who was arrested last week, also denied the charges during his first appearance at The Hague on Monday, calling them an “injustice”.