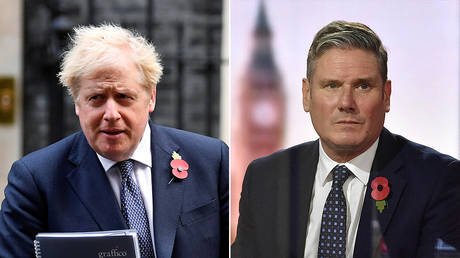 UK Labour leader Keir Starmer criticized PM Boris Johnson for allegedly spending £130 million on public relations in 2020, saying the cost raises serious questions about how contracts are being awarded by the government.

The comments were raised at Prime Minister’s Questions on Wednesday after British media reported that Vaccine Taskforce chair Kate Bingham used eight consultants to manage the project’s media strategy, with the government approving the expenditure.

Starmer challenged Johnson over whether £130 million – a figure Labour compiled from government spending data and released earlier Wednesday – could be described as a “reasonable use of taxpayers’ money.” The opposition leader said the vast cost raises “a real question about the way contracts are being awarded” by the government and criticizing lack of “transparency and accountability” in the process.

Labour MP Darren Jones went a step further than his party leader earlier in the week, calling directly for Bingham to be sacked over the alleged use of taxpayers’ money.

I don’t doubt the great work of the UK Vaccine Taskforce but Ministers and their appointed friends must follow the rules. There are serious questions to be answered: access to information, use of public funds, personal enrichment and public contracts for Downing Street friends. pic.twitter.com/2kkPwynWap

British newspapers have reported that Bingham, who is under fire over the PR consultancy spending, is expected to resign from her position as chair at the end of the year. She was appointed to the unpaid role in May, having temporarily taken leave from her position as a managing partner at SV Health Investors.

Also on rt.com
UK’s beleaguered vaccines chief accused of profiting from $65m of taxpayers’ money steered towards her venture firm


Johnson rebuffed the attacks by turning on Starmer over the Labour Party’s criticism of the Vaccine Taskforce in recent days and demanding that he “pay tribute to them” for securing 40 million doses to be distributed to the public, once the vaccine is approved.

On Monday, following the announcement that Pfizer’s Covid-19 vaccine has been found to be 90 percent effective, the taskforce announced it had ordered 40 million doses, as well as 300 million doses of other vaccines under development.

SpaceX launch NASA Crew-1: How to watch the mission to the ISS live

MacBook Air and Pro with M1 opens the door to 5G. It can't come soon enough