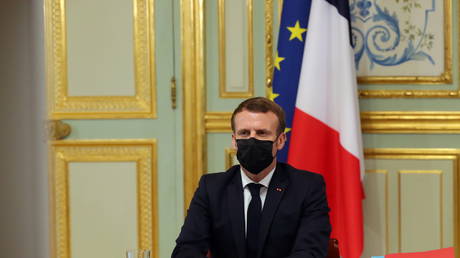 French President Emmanuel Macron insisted that Europe will not give into terror following a deadly attack in Austria’s capital, voicing support for a “friendly country” while threatening retaliation for their shared “enemies.”

“We French share the shock and grief of the Austrian people struck this evening by an attack in the heart of their capital, Vienna. After France, a friendly country is attacked,” Macron said in a pair of tweets on Monday evening – one in French, the other in German.

This is our Europe. Our enemies must know who they are dealing with. We will not give up anything.

The comment came amid running gun battles between armed assailants and police in downtown Vienna on Monday night, following an incident near the city’s largest synagogue deemed a terrorist attack by the Austrian Interior Minister. While the attackers’ motives remain unclear, police have confirmed that “several suspects armed with rifles” have fired their weapons in six different locations, killing at least one bystander and injuring several others. One of the gunmen was also shot and killed by officers, police said.


The President of the European Commission, Germany’s Ursula von der Leyen, joined Macron in condemning the “brutal” attack, saying “Europe stands by Austria’s side in full solidarity,” while the EU’s high representative for foreign affairs Josep Fontelles dubbed the shootings “cowardly [acts] of violence and hate.”

I am shocked and saddened by the brutal attack that took place in Vienna. My thoughts are with the families of the victims and the Austrian people. Europe stands in full solidarity with Austria. We are stronger than hatred and terror.

I am shocked and moved by the terrible news about tonight’s attacks in Vienna.A cowardly act of violence and hate.My thoughts go to the victims and their families and the citizens of #Vienna. We stand by your side.

France has seen a number of shocking terrorist attacks in recent weeks, including a stabbing spree at a Catholic basilica in Nice last Thursday, as well as the gruesome beheading of a school teacher in a suburb of Paris in October. Both have since been labeled “Islamist terrorist attacks” by French authorities, who have responded to the violence with ramped up security around schools and houses of worship nationwide, including the deployment of thousands of soldiers to French streets.

Best online will makers for 2020