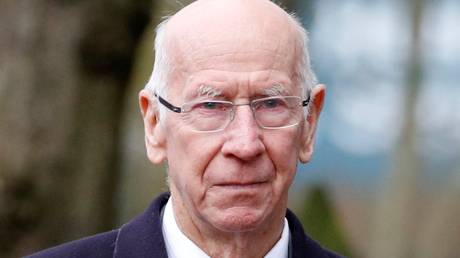 Manchester United icon and English 1966 World Cup winner, Sir Bobby Charlton, 83, has been diagnosed with dementia, it was revealed by his family on Sunday.

Charlton won three league titles, a European Cup and a solitary FA Cup during a 17-year spell with the Red Devils between 1956 and 1973 and currently ranks as the second top goalscorer in Manchester United history. His tally of 249 goals was surpassed by Wayne Rooney in 2017.

News of Charlton’s diagnosis follows the death of his older brother and fellow World Cup winner Jack Charlton in July, and Saturday’s news that another former United player and World Cup winner, Nobby Stiles, had passed away. Both had also been diagnosed with dementia.

Also on rt.com
‘The heart & soul of the the team’: Tributes pour in from England legends including Beckham after World Cup winner Stiles dies


Reflecting on the news, his wife, Lady Norma Charlton, outlined that she hopes that her husband’s diagnosis would help bring further awareness to the debilitating condition.

In a statement released Sunday, Manchester United pledged to continue their offer of “love and support” to the Charlton family in the wake of the news.

“Everyone at Manchester United is saddened that this terrible disease has afflicted Sir Bobby Charlton and we continue to offer our love and support to Sir Bobby and his family,” the club announced.

Yet another hero of our 1966 World Cup winning team has been diagnosed with dementia. Perhaps the greatest of them all, @SirBobby. This is both very sad and deeply concerning.

Very sad reading the news about Sir Bobby Charlton’s diagnosis with dementia.😢Mr Manchester United, don’t you worry, regardless of your poor health, you will NEVER be forgotten by Manchester United.❤️ pic.twitter.com/BLTuDaIVfo

Charlton is without doubt one of the most illustrious players in Manchester United’s proud history. In addition to the goal record he held for more than three decades, he was also the club’s record appearance holder until he was overtaken by Ryan Giggs in 2008.

At the age of 20, Charlton was a survivor of the Munich air crash in 1958 in which eight of his United teammates lost their lives.

Nobby Stiles gone, Bobby Charlton diagnosed with dementia. Horrible few days for my club. This is really tough to take.

He was invited to become a member of the board of directors at Old Trafford in 1984 and continued in that role until 2018, but remained a significant presence at the club ever since.

Sadly, Charlton becomes the fifth member of England’s 1966 World Cup-winning squad to have been diagnosed with dementia following Stiles, his brother Jack, Martin Peters and Ray Wilson. The latter two passed away in 2019 and 2018.

NFL is confronting racism, but are Black quarterbacks continuing to be stereotyped?