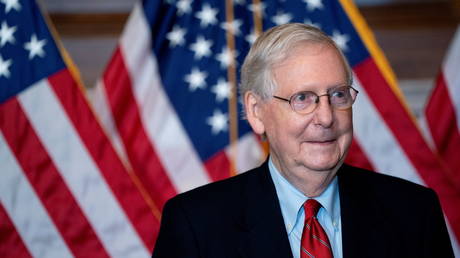 Senate Majority Leader Mitch McConnell (R-Kentucky) is facing a wave of criticism from Biden supporters after refusing to acknowledge him as president-elect and defending Donald Trump’s legal battles over the election outcome.

“Obviously no states have yet certified their election results,” McConnell said in a lengthy speech on the Senate floor Monday. Mmultiple states will likely require recounts and Trump’s various lawsuits could lead to more changes to vote tallies, he added.

The Kentucky senator said that “in the United States of America, all legal ballots must be counted, any illegal ballots not be counted,” and the counting process should be “transparent on both sides.”

Also on rt.com
Forget Joe Biden… The big news is Kamala Harris, who is clearly being groomed to take over as president in 2024


Trump has accused Democrats of stealing the election by dumping illegal ballots in states like Michigan and Pennsylvania, where he was leading on election night only to have Biden be the projected winner in both due to extended counts.

Trump’s campaign has also accused multiple states of not being “transparent” and allowing Republican poll watchers as much access to observe the counting as Democrats.

McConnell acknowledges that the election led victories to GOP senators and House members. But for presidential race, he says “no states have yet certified their election results” and Pres. Trump is “100% within his rights” to weigh legal options. He makes no mention of Joe Biden pic.twitter.com/X8rZUXVaOA

Though McConnell did not endorse any of these theories, he did say the president is “100 percent within his rights to look into allegations of irregularities and weigh his legal options.”

McConnell did, however, slam the media for projecting Biden victories early in various states.

“The Constitution gives no role in this process to wealthy media corporations. The projections and commentary of the press do not get veto power over the legal rights of any citizen, including the president of the United States,” he said.

Trump is a total disgrace, but Mitch McConnell may go down as the most corrupt and duplicitous politician in modern American history.

While many Republican officials have not acknowledged Biden’s victory amidst Trump refusing to concede the election, McConnell’s refusal to and his seeming support of Trump’s legal efforts has earned the senator plenty of pushback from Biden supporters on social media, with some even referring to him as a “traitor.”

Trump continued to insist he was victorious in the election on Monday, predicting a eventual “big presidential win” in Georgia and alleging voter fraud in states like Nevada.

Georgia will be a big presidential win, as it was the night of the Election!

Nevada is turning out to be a cesspool of Fake Votes. @mschlapp & @AdamLaxalt are finding things that, when released, will be absolutely shocking!