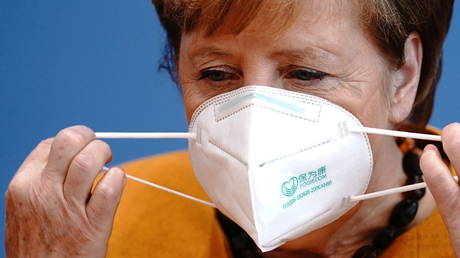 German Chancellor Angela Merkel has warned that Covid-19 “punishes half-heartedness,” as she called on Germans to pull together during the partial lockdown, promising a “bearable” December but still under some restrictions.

Speaking on Monday, Merkel said that December could be bearable if this month’s partial lockdown is successful in adequately limiting the spread of the coronavirus. She added that “it shouldn’t be a lonely Christmas,” but people should expect a number of restrictions on social gatherings, and ruled out “big, lavish New Year’s parties.”

The chancellor appealed to all Germans to make the partial lockdown a “mutual success” as new Covid restrictions came into place in Germany on Monday, asserting that it was in everyone’s hands as to whether November would prove a turning point.

We are dependent on the majority of people participating… and thus saving lives.

The measures, which are initially limited to four weeks, apply to the nation as a whole and include the closure of restaurants, bars, gyms, cultural and leisure facilities, as well as strict rules on face-to-face meetings. Travel within Germany and staying in hotels is also forbidden.

Merkel claimed that the decisive factor is the seven-day incidence rate, adding: “We have to go into the range well below 50, because then the health authorities can track the contacts.” Germany’s current seven-day average infection rate is almost 128 per 100,000 people.

The chancellor stated that in 75 percent of Covid cases, the health authorities cannot locate the origin of the infection. She said that it is a necessity for the authorities to be able to track cases in order to control the outbreak.

Also on rt.com
No beer for the Chancellor: Iconic Berlin political pub blacklists Merkel and cronies for ordering new lockdown


The new lockdown measures have been heavily criticized, with many suggesting that law-abiding citizens were paying the price for the irresponsible behavior of others.

Germany is one of a rising number of European nations to introduce new strict measures to tackle Covid in November. Ireland, England and France have already announced month-long lockdowns, whilst tougher measures are also likely to be introduced in Italy and Portugal.