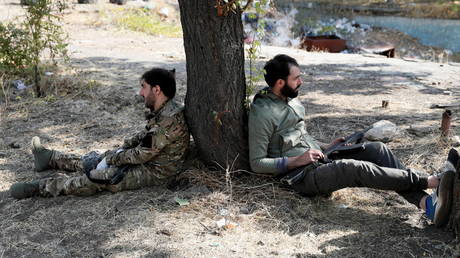 Forces of the disputed region of Nagorno-Karabakh were exhausted and on the brink of being crushed by the time terms of a truce were agreed with Azerbaijan, the defeated region’s leader said.

Armenia on Monday signed a peace deal with its rival Azerbaijan, relinquishing large parts of Azerbaijani territory previously controlled by the ethnic Armenian forces of Nagorno-Karabakh. The breakaway region’s leader, Arayik Harutyunyan, who signed the truce too, addressed the development on Tuesday, acknowledging the military defeat in a TV address.

He said the concessions made to Azerbaijan prevented a total loss of Nagorno-Karabakh, which would have happened in a matter of days, had the hostilities continued. The defending forces were exhausted by a Covid-19 outbreak and more than 40 days of fighting and being outgunned by their opponents, Harutyunyan said. Turkish drones and mercenaries from the Middle East fighting for Azerbaijan had turned the tide of the battle, he said.

13. Certainly we didn’t fight against Azerbaijan, and definitely not only the Turkish officer or military equipment was on the battlefield during the hostilities. The participation of Turkish soldiers, terrorists, mercenaries from different countries were too – Arayik Harutyunyan

The de facto surrender happened after the loss of the strategically important city of Shusha, which, Harutyunyan acknowledged, was under full control of the Azerbaijani side by November 7. This cost the defending forces many lives and brought hostilities to the outskirts of the region’s capital, Stepanakert.

“If the fighting reached our rear, the consequences for the front would have been irreversible,” the politician said.


Nagorno-Karabakh split from Azerbaijan in the early 1990s in a protracted war, which left the region itself and surrounding Azerbaijani areas under the control of its self-proclaimed government. During the recent hostilities, the Turkey-backed Azerbaijani forces recaptured most of its territory.

The truce, which was mediated by Russia, leaves a portion of Nagorno-Karabakh as well as a land corridor connecting it to Armenian territory under Stepanakert’s control. Russian peacekeepers have been deployed to the area to keep the warring parties apart.


The news caused turmoil in Armenia, which supported Nagorno-Karabakh militarily. Overnight, angry crowds stormed the parliament building and the residence of Armenian Prime Minister Nikol Pashinyan, whom they blame for the defeat.

No one can seize your stimulus check, right? Not true. Here are the rules