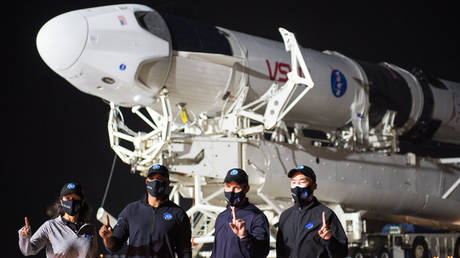 SpaceX’s Crew Dragon orbital vessel has cleared the final bureaucratic hurdle, receiving a certification from NASA for carrying astronauts to the International Space Station ahead of a launch scheduled for the weekend.

“I’m extremely proud to say we are returning regular human spaceflight launches to American soil on an American rocket and spacecraft,” NASA Administrator Jim Bridenstine said after the agency finalized its Human Rating Certification Plan for Crew Dragon on Tuesday.

Bridenstine called the certification “an incredible achievement” for both NASA and SpaceX, which “highlights the progress we can make working together with commercial industry.”

Elon Musk, founder and chief engineer of SpaceX, praised the company’s engineers and suppliers who worked to develop the “first commercial human spaceflight system in history.”

This is a great honor that inspires confidence in our endeavor to return to the Moon, travel to Mars, and ultimately help humanity become multi-planetary.

The agency’s partnership with corporations is “changing the arc of human spaceflight history” by expanding access to orbit, according to NASA’s director of commercial spaceflight development Phil McAlister.

“We are truly in the beginning of a new era of human spaceflight,” he said.

Widespread commercial spaceflight remains a long way off, however, as SpaceX received government subsidies and still had to be certified by NASA before the Crew Dragon could become operational. Aerospace giant Boeing was also developing their own vessel, the Starliner, but Crew Dragon was the first to finish the trials successfully.

NASA has every reason to be excited about the Crew Dragon, though, since its November 14 launch will mean the return of US capability to regularly launch humans into orbit. Prior to Crew Dragon’s manned test flight in May, the last time NASA astronauts headed to space from American soil was on the final flight of the Space Shuttle in July 2011, after which that program was scrapped.

Ever since, NASA has had to pay for seats on board Russia’s Soyuz spaceships, a heavily-modernized version of a 1970s Soviet design that can get to the station in low Earth orbit in as little as three hours. The Crew Dragon’s test flight took almost 19 hours to dock, by comparison.

The first official mission for Musk’s spaceship, creatively named Crew-1, is supposed to take off on Saturday evening, from Launch Complex 39A at Cape Canaveral. It will carry three NASA astronauts – Michael Hopkins, Victor Glover and Shannon Walker – as well as Soichi Noguchi from the Japan Aerospace Exploration Agency (JAXA), on a six-month mission to the ISS.

No one can garnish your stimulus check, right? Not true. Here are the rules