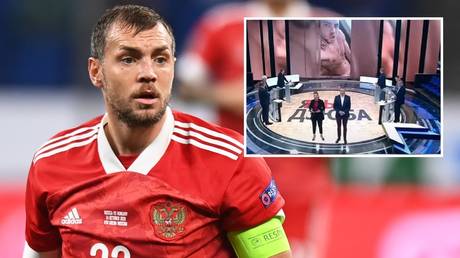 Anyone tuning in to Russian daytime television on Monday would have been in for a shock.

There, on Russia-1, one of the country’s main channels, was a panel discussing the X-rated video featuring Artem Dzyuba, captain of the Russian national team.

On giant screens behind the hosts and assembled guests were images of Dzyuba in the compromising footage which has been the talk of Russia since it was leaked on social media on Saturday night.

Should the bedroom strokes seen around the nation lead to Dzyuba being stripped of the captaincy? Should what happens in private stay in private?

Those were the big issues at hand as the nation’s housewives watched on.

Dzyuba, a 6ft 4in battering ram of a center forward, was already a household name in Russia for his exploits during the nation’s run to the World Cup quarterfinal on home soil back in that heady summer of 2018.

The Zenit St Petersburg striker won plaudits for his performances on the pitch but also affection for wearing his heart on his sleeve – including in a tearful interview when Russia agonizingly fell to Croatia in a last-eight penalty shootout.

That summer was a story of personal redemption for Dzyuba, exiled from the Russia squad for the years leading up to the World Cup, only to be recalled on the eve of the tournament and seize his chance – and his nation’s hearts – in fairytale fashion.

‘Dzyubamania’ swept Russia, and after the World Cup his redemption was complete when he was elevated to captain by manager Stanislav Cherchesov.

His ‘army salute’ celebration became one of the most iconic images in Russian football.

Now, however, Dzyuba is in the spotlight for standing to attention in a drastically different way.

In it, Dzyuba was seen staring into the camera while pleasuring himself in bed.

The footage did not appear to be recent, with reports that it was from December of 2019, based on a sports broadcast that could be heard on the TV in the background.


By Sunday morning, the initial spurt of memes and gags at Dzyuba’s expense had turned into a flood. Any initial doubts or hopes that the video might not be him had been tossed aside.

Russia manager Cherchesov announced that Dzyuba would not join up with the squad for the upcoming matches with Moldova, Turkey and Serbia, citing the need “to protect both the team and the player from excessive negativity and tension.”

All eyes turned to St Petersburg, where Dzyuba was due to lead Zenit out for a Russian Premier League clash with Krasnodar later in the day.

Would he remain as skipper? Would he even play at all?

When the team news was announced, Dzyuba was in the line-up but without the captain’s armband.

In a rollercoaster game in keeping with his wild weekend – and during which he was the target of obscene taunts from his own fans – Dzyuba missed a penalty on the stroke of half-time but came good in the second half, putting his team 2-1 in front.

Zenit added a third in injury time to seal victory, and Dzyuba later issued a video message thanking fans for their support.

“We’re all sinners, unfortunately. I can only blame myself,” he said, adding in typically fatalistic Russian fashion that he been taught a “harsh” lesson.

It was hard not to feel for the big forward as he bravely fronted up for the camera – showing his balls in all the right ways this time, some might say.


That, however, was most certainly not the end of it.

By that stage, one man’s bedroom fondle had become fodder for a much broader discussion in Russia over attitudes to sex, personal privacy and fundamental morality.

Returning to that Russia-1 TV studio on Monday, and with images of a groaning Dzyuba plastered across giant screens in the background, debate raged over the “tsunami of problems” for the footballer and the “chorus of moralists” calling for him to be stripped of the national team captaincy.

“Why are we discussing this dirt? Let him play, but don’t let him be captain,” one guest spurted, adding that the hackers responsible for stealing the X-rated footage “need to be found and sent down for a long time.”

“It’s digital terrorism,” Kandelaki raged, warning the men in the studio that the same thing could happen to them.

The backlash against Dzyuba reminded her of the days of the Soviet Union, she said, sarcastically asking: “Why not hold a vote on Dzyuba?”

All the while, Dzyuba’s naked torso and contorted face were supersized in the background, interspersed with clips of his footballing prowess.

The Soviet theme was also picked up by Russian socialite-turned-presidential candidate Ksenia Sobchak, in a post to her 7.9 million Instagram followers on Sunday.

“Here they’re deciding to punish a top sportsman for a personal video.What is that all about? Do you realize at all how ‘new ethical standards’ are becoming familiar and the foul-smelling standards of the USSR? Where at the Communist Party meetings they could admonish someone for obscenity,” Sobchak opined.

“Everyone masturbates how they want! It’s unacceptable to make the professional dependent on the personal… Or was there no sex in the USSR?”

Also on rt.com
‘Everyone w*nks how they want!’ Ex-presidential candidate Sobchak likens Dzyuba video hysteria to ‘sex in USSR’


Celebrity support for Dzyuba seemed to be a running theme.

Flamboyant pop king Philipp Kirkorov questioned how “all a person’s achievements be erased so instantly all because of the leak from your personal life?”

Russian sports outlets, meanwhile, grappled with how to handle the scandal.

Some such as Sports.ru took the moral high ground, asserting they would not publish stories about the content of the video or images from it, and would stick to official responses from Dzyuba, his club and those close to the footballer.

“Such a video does not say anything about Dzyuba’s career – in part because we do not have context (who and why published this video almost a year later).

“We do not support the publication of intimate videos by third parties.”

Elsewhere, Russia’s ‘yellow press’ picked up on the voice of TV presenter Maria Orzul curiously being heard in the background of Dzyuba’s intimate home video. The pair were said to have been romantically linked back in 2015 while both married.

Beyond the video and its private implications for Dzyuba, there was the darker side to how it would affect his relationship with Zenit fans.

The big target man’s goals have helped Zenit to back-to-back Russian Premier League titles, securing an uneasy truce with the hardcore section of support who have viewed him with suspicion since he arrived from bitter rivals Spartak Moscow – his boyhood club – back in 2015.

Zenit’s ‘Landskrona’ Ultras group – a controversial force in the club – issued a message on Monday in which they effectively disowned the forward, accusing him of narcissism and bringing the club’s good name into disrepute.

Dzyuba had been subjected to obscene chants from the Zenit Ultras on Sunday, and pointedly gestured in their direction after scoring before blowing kisses to other sections of the stadium.

It remains to be seen whether peace can be restored between the two parties.


Meanwhile, the internet was undefeated.

The debate on Twitter at times turned plain weird, with Match TV commentators Dmitry Zhichkin and Pavel Zanozin getting into a bizarre back-and-forth after the former suggested Dzyuba should be stripped of the national team captaincy.

“How does the camera change things?” questioned Zanozin, drawing the reply from Zhichkin that “it changes everything…”

“If you think that behavior like that is fitting for the captain of Russia, I have bad news for you,” he added.

In a no less curious turn of events, the slogan ‘I am/we are Dzyuba’ appeared across social media, making use of a message typically reserved for jailed journalists (although in this case somewhat less earnest).

From abroad, Russians might be perceived as stern-faced, ultra-conservative types, but their humor is up there with the best of them.

“When Dzyuba’s used his hand but you don’t want to check with the video assistant referee (VAR),” jested another Twitter user.

Others posted mock-up images of a new suggestion for the Zenit badge, featuring a hand clasping the pointed end of the club’s logo with two footballs below it.

Most was light-hearted banter as football fans indulged in a cheap opportunity for a laugh at the expense of a star from a rival club.

In short, they were all there amid the uproar: libertarians, moralists, critics, comedians… people harking back to the Soviet days.

An eruption of opinions, humor, hand-wringing and even soul-searching – and all because a man privately filmed himself enjoying the pleasures of his right hand.