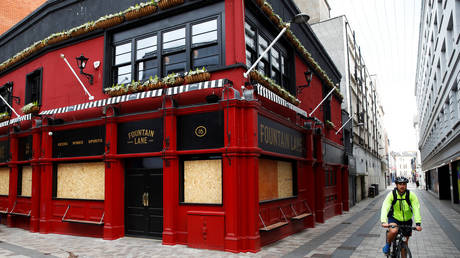 The power-sharing political parties in Northern Ireland have been debating for days what measures to put in place after the country’s four week ‘circuit breaker’ lockdown ends – except they’ve been working to the wrong date.

The Northern Ireland Assembly in Stormont was working on the belief that restrictions it had introduced were set to end at midnight on Thursday. However, the Department of Health has received “revised legal advice” showing it actually expires 24 hours later, at midnight on Friday.

The confusion is likely to add to the growing frustration among business owners in Northern Ireland, who have criticized Stormont for a lack of clarity over when they will be able to reopen and what sanitary measures they will need to put in place.

Also on rt.com
European leaders issue bleak reminder that Christmas 2020 won’t be a normal one, despite Covid-19 vaccine euphoria


Expressing the feelings of affected businesses, hotelier Bill Wolsey told PA that “our politicians are a bit like track and trace – not fit for purpose.”

The deadline mistake gives the parties an extra 24 hours to attempt to reach some form of agreement on the next steps in easing the lockdown restrictions.

However, health officials have warned Stormont that the ongoing uncertainty is undermining public trust by presenting a confusing message at a time when the country is combating a second wave of coronavirus.

That second wave has struck Northern Ireland much harder than the first. Hospital bed occupancy has hit 101 percent, according to the latest health department data, and there are currently 144 active outbreaks of Covid-19 in the country’s care homes. Since the pandemic began, the nation has reported a total of 45,241 cases and 825 deaths due to coronavirus.

Three potential proposals have been voted down during debates between members of the power sharing executive, after Ulster Unionist Health Minister Robin Swann suggested extending the lockdown by one to two weeks, which the DUP opposes.

The best workouts for runners (besides actually running)

Marvel's WandaVision will stream on Disney Plus starting Jan. 15