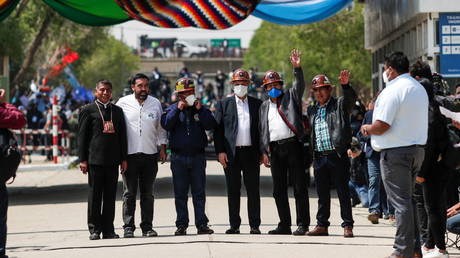 The NY Times insisted Bolivia’s socialist government-elect was shunning former president Evo Morales as he returned from exile a year after he was chased out by a US-backed coup, even though both President and VP served under him.

The US outlet made no secret of its dissatisfaction over last month’s election results, which saw Morales’ MAS (Movement Toward Socialism) party regain power after a year of right-wing quasi-authoritarian rule. MAS won majorities in both chambers of parliament, and president-elect Luis Arce was allegedly hand-picked by Morales as a candidate.

But while Arce and his vice president David Choquehuanca served as ministers in Morales’ government, the Times nevertheless attempted to paint their physical absence as the former head of state crossed the land border from Argentina into Bolivia on foot as some kind of disrespect. At the same time, the outlet mentioned the terrain was “dusty and frigid” and hinted at the work the newly-elected government has to do to restore MAS’ policies after the country’s dalliance with dictatorship – including redecorating government buildings, as a humorous video making the rounds suggested.

Venezuela’s foreign minister takes down the photo of Juan Guaido at the embassy in Bolivia — and puts up Simon Bolivar. Tough day for the coup backers in US & Canada. https://t.co/EQrH5PLQCh

Morales, who pledged to return following Arce’s victory and made good on his promise on Monday after terrorism charges and an arrest warrant against him were dropped, has no outward intention of rejoining government, having pledged to return to his roots in labor activism. However, the Times notes he remains the nominal leader of MAS even as they mention that Arce campaigned on a promise to govern without interference from the long-time leader.

In the estimation of the Times, Morales’ return is “likely to complicate the governing task” of Arce, who served as finance minister while Morales’ policies took the country from “lower-income” to “lower-middle income” by the World Bank’s own designation. While Arce has hinted some austerity may be necessary, given the worldwide economic downturn that has come on the back of the coronavirus pandemic, it was his economic policies that brought comparative prosperity to the country.

The paper had to admit that the few wealthy “protesters” from “the prosperous eastern region of Santa Cruz” who’d vowed to “strike” against the pro-Morales government, had not provided any evidence of fraud in the 2020 election. Meanwhile, Morales, the first indigenous leader of Bolivia, will be traveling through the mountains for over 1,000 km (625 miles) as part of his homecoming, passing through areas where he remains very popular – though the Times tried to diminish the locals’ chants of “Evo! Evo! Evo!” by mentioning many of them were poor coca farmers.


Morales fled to Mexico last year and from there to Argentina after supposed election “irregularities” hyped by western media led to a military coup. While the leader’s decision to override term limits may have raised a few eyebrows, the Supreme Court allowed it and a later study of the election by Massachusetts Institute of Technology researchers found none of the fraud alleged by the Organization of American States (OAS) and indeed noted that by its criteria the US’ own elections might be deemed fraudulent.

Miley Cyrus' 'Party in the U.S.A.' back on top after Biden win