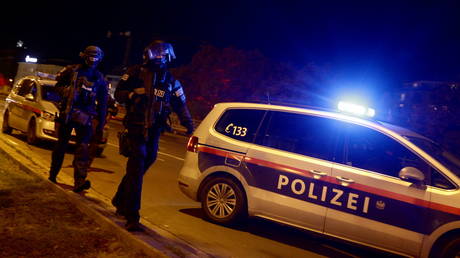 At least 15 people have been injured, including seven seriously, after multiple attacks rocked Vienna in the area near the city’s main synagogue. Police confirmed a bystander was killed, and one attacker was shot.

In an interview to Austrian ORF broadcaster, police spokesman Harald Sörös has confirmed that law enforcement was responding to six crime scenes, all located within the same area near the Jewish temple, which was closed at the time of the attack.


Sörös has neither confirmed, nor denied local media reports about a possible hostage situation in a restaurant in the city center, saying that the situation is dynamic and it’s “too early” to confirm anything.

A police officer is among at least 15 injured in the spate of the attacks, the spokesman said, noting that “there have been many injuries” resulting from the apparent shooting spree. It’s so far unclear, how many perpetrators were involved in the incident.


The attackers targeted the area around the Stadttempel, Vienna’s Jewish synagogue dating back to the 1820s, on Monday evening. It was unclear whether the synagogue itself or the adjacent community offices were targeted, as they were closed at the time.

The best movies to watch on Disney Plus for Thanksgiving

2020: 5 Considerations, Which May Impact Real Estate