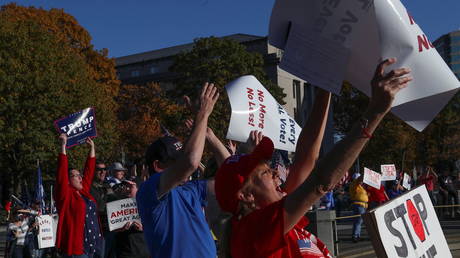 Parler, the social-media platform touted as a bastion of free speech, is suffering overload-related glitches as it struggles to absorb a massive inflow of new users who were alienated by Twitter’s latest round of censorship.

“Parler has exploded,” radio host and Parler stakeholder Dan Bongino said Sunday on Twitter. “We’re adding thousands of users per minute, and we’re working out the glitches as a result.” He denied rumors that the platform had been sold.

All,Parler has NOT been sold. I assure you, as an owner of the company, that if we sold it, I would know! Parler has exploded. We’re adding thousands of users per minute & were working out the glitches as a result. But don’t buy internet BS rumors from hoaxsters. I own Parler.

The surge in new users made Parler today’s most downloaded application in the US on Google Play, overtaking such platforms as TikTok, Instagram and Twitter. Prior to June, Parler was averaging about 2,000 downloads. Its user base doubled that month, to about 1.5 million, after Twitter’s banning of conservative meme creator Carpe Donktum sparked an anti-censorship backlash. Parler is now reportedly adding as many users per minute as it used to gain in a day.

I heard that Parler had 2 million new acts that were added today and they are on OVERLOAD!!

Parler is having issues. It may be down…

“Liberal lunatics have awakened a sleeping giant,” Bongino said. “We gave a collective middle finger to the tech tyrants just now as Parler became the No. 1 most-downloaded app in the world.”

Liberal lunatics have awakened a sleeping giant. We gave a collective middle finger to the tech tyrants just now as Parler became the NUMBER ONE most downloaded app in the world. Thank you! pic.twitter.com/OfYMSoMvIZ

The conservatives-driven revolt against Big Tech came after Twitter and Facebook supressed reports about alleged influence-peddling by Democrat candidate Joe Biden’s family, locking out the New York Post account, which first came with the story, for two weeks. Twitter has also been flagging posts by President Donald Trump and his supporters, including messages alleging election fraud, as “disputed.”

Henderson, Nevada-based Parler was founded in 2018 by software engineers John Matze and Jared Thomson. It had about 4.5 million users prior to the November 3 election. Those users included prominent conservative voices, such as Trump lawyer Rudy Giuliani, Eric Trump and US Representative Devin Nunes (R-California). Some of its high-profile and most controversial voices – such as InfoWars chief Alex Jones, Proud Boys founder Gavin McInnes, and writer Milo Yiannopolous – had been kicked off other platforms.

Also on rt.com
Twitter and Facebook are smacking down all questioning of US election integrity. What about 4 years of Russiagate?


Matze, who is Parler’s chief executive, said the company’s user base is becoming more diverse as censorship on Big Tech platforms worsens. “This doesn’t just affect conservatives, this censorship, it affects everybody,” he said on Thursday in an interview on KUSI News in San Diego. “A lot of people are unhappy that they’re not seeing enough debate and discourse on Twitter anymore. It’s kind of like a big Biden rally.”

Sorry, not everyone will get a second stimulus check. What we know so far