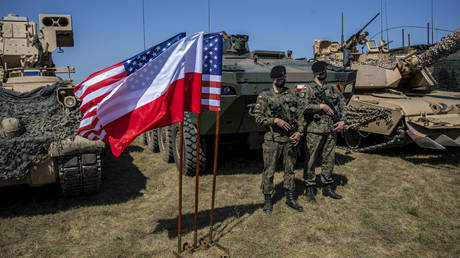 A senior Polish official has said that military cooperation between Warsaw and Washington will continue to increase if Joe Biden replaces Donald Trump. Poland has signed deals to buy Patriot missile systems and F-35 jets.

“Contrary to the opinions or emotions that have been voiced by some politicians and commenters, I am convinced that the Polish-American relations will develop as well as before, and the Polish-American alliance will grow stronger,” the head of the prime minister’s chancellery, Michal Dworczyk, told Polskie Radio.

The change of the president of the US will not affect the alliance and possibilities of cooperation in the military field, which is extremely important to us. We are reliable partners to the Americans.

On top of that, both parties can benefit from contracts, Dworczyk stressed. “Poland is strengthening its defense potential, and it is simply a good deal for the American business and defense sectors,” he explained.

Also on rt.com
Biden administration will find it hard to integrate itself in a world changed by Trump


Warsaw has been one of Washington’s closest and most loyal allies in Europe. In 2018, Poland signed a $4.75 billion deal to buy American-made MIM-104 Patriot air defense missile systems, which was the largest arms procurement in its history. In January, the Eastern European nation inked an even larger contract to buy 32 F-S5A Lightning II jet fighters for $4.6 billion from the US.

Major US news outlets have projected that Joe Biden will beat Donald Trump by securing more than 270 Electoral College votes needed to win the presidency. Trump, however, has refused to concede and alleged widespread voter fraud.

Congratulations to @JoeBiden for a successful presidential campaign. As we await the nomination by the Electoral College, Poland is determined to upkeep high-level and high-quality PL-US 🇵🇱🇺🇸strategic partnership for an even stronger alliance.

On Saturday, Polish President Andrzej Duda congratulated Biden on running “a successful presidential campaign,” and said that Warsaw was determined to bring the two nations to “an even stronger alliance.”