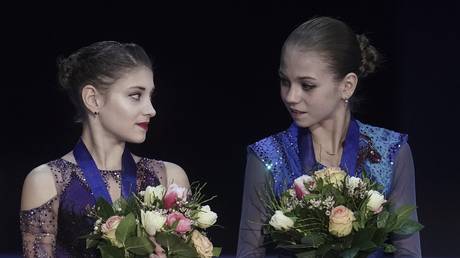 Russian quad-jumping sensation Alexandra Trusova has proved again she is one of the most technically gifted skaters, by winning the fourth stage of the Cup of Russia in Kazan, beating reigning European champion Alena Kostornaia.

The 16-year-old demonstrated insane technical content at the event, throwing FOUR quadruple jumps in her free program, three of which were decently landed.

READ MORE: ‘I just want to talk about myself’: Zagitova shuts down question about relationship with Russian rival Medvedeva

The European bronze medalist nailed a quad salchow and a quad lutz before falling on a quadruple toe loop.

The error didn’t affect Trusova’s performance much, as she effortlessly landed another quad toe loop in combination with an oiler and a triple salchow in the second part of her routine.

Despite two falls, Trusova posted a whopping 248,63 points which turned out to be out of reach for the rest of the competitors, including Kostornaia, who settled for silver.

The skater, who opened a new season in Kazan, was practically faultless on her jumps, which didn’t include her signature triple axel.

The absence of ultra-c elements didn’t allow the skater to leapfrog Trusova in the final standings. Kostornaia collected 226,31 points, finishing second, a full 20 points behind Trusova.

Bronze went to Maya Khromykh, who attempted to land a quad in her program, scoring 212,72 points.

The fifth and final stage of the Cup of Russia will be held in Moscow in December.