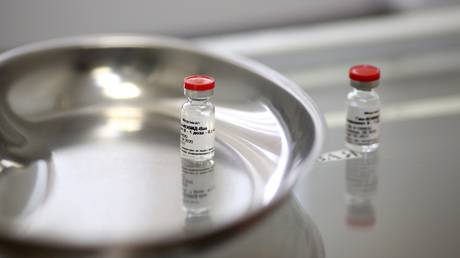 The developers of Russia’s pioneering Sputnik V coronavirus vaccine say their formula appears to show 92 percent efficacy and no serious side effects, based on the preliminary results of a large-scale Phase III clinical trial.

The vaccine is being tested in a large-scale double-blind survey involving 40,000 volunteers. Preliminary results based on the observation of 16,000 participants indicate that the drug does a good job of protecting people from the coronavirus, the Gamaleya Research Institute of Epidemiology and Microbiology said on Wednesday.

According to the statement, there were 20 confirmed Covid-19 cases among the group, which consisted of volunteers who were injected either with the vaccine or a placebo. The effectiveness of Sputnik V is estimated at 92 percent, meaning it boosts the immune system enough to fend off the coronavirus in just over nine out of ten people.

The subjects of the Phase III testing were not the only ones to receive the jab. Russia registered the vaccine in August after it was proven safe in a smaller Phase II survey and made it available to volunteers from high-risk groups, like doctors in Covid-19 wards. The developers observed 10,000 of those people and now say the results showed a similar efficacy rate of over 90 percent.


The report said that, as of Wednesday, “no unexpected adverse events were identified as part of the research.” Some of the vaccinated people reported flu-like symptoms such as fever, fatigue and headache, or pain at the injection site, but those were all short-term.

The Gamaleya Institute promised to publish a report on its findings in a world-leading medical journal after an evaluation and to provide access to a full clinical trial report once the tests are fully complete. The researchers say six months will be necessary to make sure that participants of the study do not develop dangerous side effects.

The vaccine is based on two types of human adenoviral vector, with two shots administered three weeks apart.


Russia has great hopes for the vaccine, which was funded by the country’s sovereign wealth fund, the RDIF. Some other countries, including Belarus, the UAE, Venezuela, and India, are conducting their own clinical trials of Sputnik V, with an eye towards potentially purchasing it for domestic vaccinations or licensing it for production.

Would your second stimulus check be bigger if it arrived before the end of the year?

December 26, 2020
Check Also
Close
Featured Posts
Which One Is Better? Chiminea Or Fire Pit
6 days ago