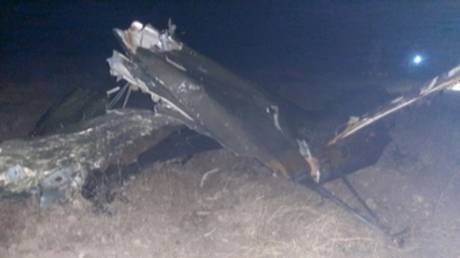 Moscow has sent a signal it appreciates Baku’s immediate admission of guilt in shooting down a Russian Mi-24 military helicopter over Armenian territory, which Azerbaijan described as a ‘tragic incident.’

“The fact that Baku immediately admitted its guilt is positive,” the Russian Foreign Ministry said in a statement, posted on Facebook shortly after midnight Moscow time on Tuesday. “We also note the assurances of the Azerbaijani side that a swift investigation will be carried out and those responsible will be punished.”

Azerbaijan had apologized for the downing of the Russian helicopter on Monday, in which two crew members were killed and one suffered injuries. The foreign ministry in Baku described it as a “tragic incident, which is an accident by nature and was not directed against the Russian side.”


Azerbaijan sent condolences to the relatives of the killed crew members, said it was ready to pay compensation, and announced an investigation to punish those responsible.

The helicopter was escorting a convoy belonging to the Russian military base located on Armenian territory on Monday, when it was struck by a portable surface-to-air missile. The mission took place near the border of Nakhichevan, the Azeri enclave on the other side of Armenia from the zone of combat operations.

The Azerbaijani military and ethnic Armenian forces have been clashing over Nagorno-Karabakh, a disputed ethnic Armenian enclave, since the end of September. The fighting has continued despite multiple ceasefires arranged by Moscow, as well as Washington. The situation is aggravated by the fact that Azerbaijan is actively supported by Turkey, a NATO member, while Armenia is a member of the Collective Security Treaty Organization – a military alliance with Russia.

Stimulus check qualifications are anything but one-size-fits-all. What to know