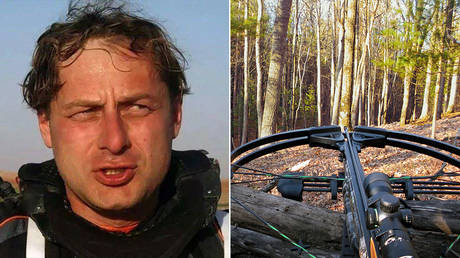 Russian businessman Vladimir Marugov has been murdered with a crossbow while sitting in an outdoor sauna cabin at his home in the Moscow region. The intruders swiftly left the scene but local police have detained one of them.

Marugov, nicknamed the ‘Sausage King’ by the media due to his ownership of two major meat companies producing salami and sausages, was killed after two masked men, armed with a crossbow and a rifle, entered his home on Sunday night. They threatened him and his partner, trying to extort money, before killing him and fleeing.

The assailants tied the couple up, and then shot a crossbow bolt through Marugov’s chest, investigators said.

The woman managed to escape through a window and called the police. By the time law enforcement arrived on the scene, however, Marugov had died from his wound, and the two suspects had managed to escape.

Later, local police discovered the suspects in their getaway vehicle, identifying it by its covered-up license plate. After a car chase, the suspects still managed to evade capture, abandoning their vehicle and fleeing on foot. A crossbow was found inside the car.

Also on rt.com
Shooting suspect FIRES CROSSBOW at LAPD after barricading himself inside apartment


On Monday, the investigators said they’d captured one of the suspected killers. His identity has not yet been made public.

What You Need From Your Real Estate AGENT?