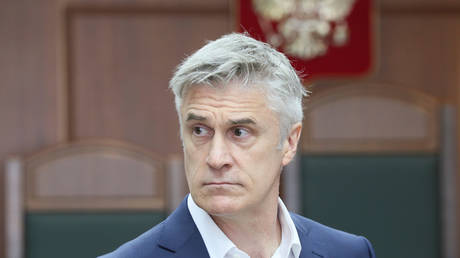 Michael Calvey and his business associates suspected of embezzlement have been released from house arrest following a court decision. The trial has also been moved to Moscow on requests from both the defense and the prosecution.

The American businessman and several other people were arrested in February 2019 on suspicion of embezzling 2.5 billion rubles ($36 million) from Russia’s Vostochny Bank. He and other suspects insisted that the case against him was fabricated.

On Thursday, Russia’s Supreme Court ruled that Calvey and others pose no flight risk and may be released from house arrest. A request to ease his pre-trial conditions of living was denied earlier in June by a Moscow city court. Calvey’s defense team said he needed more freedom to arrange medical treatment for cancer, which he was diagnosed with after his initial arrest.


Some restrictions will still apply however. The defendants are expected to spend their nights at home and are barred from communicating with each other or with witnesses.

The Supreme Court also ordered the embezzlement case to be moved under Moscow jurisdiction. Originally it was supposed to be reviewed by a court in Blagoveshchensk, a city in Russia’s Far East where the Vostochny Bank is registered.

Both the prosecution and the defense asked for the change of jurisdiction. The prosecutors said Calvey and other defendants may tamper with the witnesses, many of whom live in Moscow and would have to be transported across Russia for proceedings in Blagoveshchensk.

His lawyers pointed out that the logistics of such a process would endanger the health of the witnesseses due to the ongoing Covid-19 pandemic. The Supreme Court said it had no doubts that a fair trial could be arranged in Blagoveshchensk, but agreed with the health risk argument.


The case revolves around a stake in a subsidiary of Calvey’s company, which the bank accepted as repayment of a debt. The value of that stake was disputed by a minority shareholder, who claimed it was significantly lower than stated and that the operation was part of a financial scheme damaging Vostochny.

The companies have since agreed to resolve their conflict out of court. Incidentally on Thursday an arbitration court in Blagoveshchensk ordered the closure of a civil lawsuit filed by the bank, since its claims had been dropped.

SpaceX Crew-1 launch: How to watch NASA mission to the ISS live