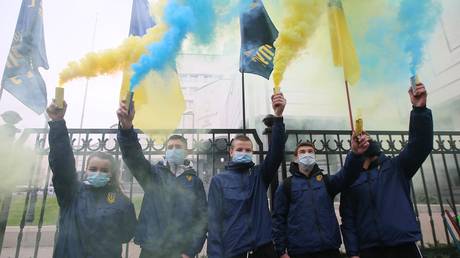 Despite electing two consecutive pro-NATO presidents, the Ukrainian people are apparently not on the same page as their elites. Only 41% want the nation to join the military alliance with 37% preferring to remain unaligned.

That’s according to a survey by the Kiev International Institute of Sociology, which also discovered that 56.6% of Ukrainians believe that their country will eventually improve its relations with Russia, with 30.1% thinking that tensions between Kiev and Moscow will persist in the longer term.

Conducted in October, the research asked Ukrainians in the west, center, south, and east of the country about their opinions on topics dividing Ukrainian society. The pollsters also spoke to residents in government-controlled Donbass but didn’t contact people in the breakaway People’s Republics of Donetsk and Lugansk.

Also on rt.com
Ukraine threatens sanctions as Nicaragua becomes first nation to open consulate in Crimea since it returned to Russia in 2014


The lack of support for NATO is a potential challenge for President Volodymyr Zelensky, who has repeatedly pushed membership as a pillar of his foreign policy. Considering the likely lack of enthusiasm for NATO in the overwhelmingly pro-Russian Donbass, the true support levels for the transatlantic alliance are likely even further away from a majority. The research also found that less than half (49%) of Ukrainians wish to join the EU.

Despite Ukraine’s struggling economy and difficult battle with Covid-19, the poll revealed that Zelensky remains the most popular party leader in the country, with 33.3% supporting him. Following behind is former President Petro Poroshenko, on 17.3%. However, despite Zelensky’s personal popularity, the survey discovered that his political party Servant of the People is not particularly well liked and would come third in an election conducted today. Interestingly, the most popular party is now the Opposition Platform — For Life, generally considered to be Moscow-leaning.

Walmart Plus: This hidden trick gets you 30 days of free trial instead of 15