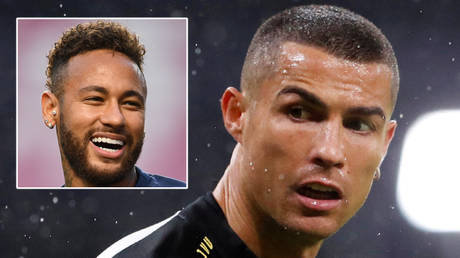 Reigning Serie A champions Juventus could solve the financial challenge of affording a new contract for Cristiano Ronaldo by swapping him for Neymar, the striker whose contract at mega-rich Paris Saint-Germain also ends next year.

Bankrolled by the almost limitless wealth of Qatar Sports Investments, the runaway Ligue 1 leaders are one of the few clubs in the world capable of paying Ronaldo’s huge salary, which is thought to be more than $36 million a year.

Neymar, the man they paid a world-record $222 million for in 2017, has an “identical” contract to Ronaldo, according to Tutto Mercato.

That could pave the way for the Brazil striker, who has long been linked with a move away from PSG and was even targeted by fans a year ago as he tried to engineer a transfer to Barcelona, to replace Ronaldo in Turin.


“A renewal is unthinkable – too heavy for the company and perhaps too burdensome even for Cristiano,” said Italian football expert Tancredi Palmeri.

“The only way to return part of the investment would be to separate in 2021. No company in the world could take on CR7’s contract, except in particular situations.

“The only particular situation could arise at PSG because Neymar is also expiring in 2022, he has a contract identical to Cristiano and, for now, a renewal [of Neymar’s contract] will not take place.”

Barcelona’s financial worries could also boost the chances of the switch materializing. Neymar was widely thought to have been pushing for a return to his former club in 2019, but the Spanish giants’ turbulent year has included players being asked to defer wages and concerns over their ability to afford a contract extension next year for all-time top scorer Lionel Messi, whose future remains uncertain.

The instability at Barca has been increased by the departure of much-maligned president Josep Bartomeu, who resigned last month, and the club’s presidential elections, scheduled for March.

Neymar and Ronaldo’s contract situations could offer a convenient solution to a situation that will become urgent if Juve cannot agree a new deal with Argentina striker Paulo Dybala.

Juventus have said they are keen to secure Dybala but Palmeri believes that Ronaldo’s strike partner wants to almost double his reporter $7 million salary, putting him above Netherlands prodigy Matthijs de Ligt.

The club were ready to sell him to Premier League clubs Manchester United and Tottenham in 2019, and Palmeri said they were now being forced to consider removing “any possible waste” from their squad.

“Juve, at this moment, cannot even afford to think about the renewal,” he added.

“They are limited by debt and lost revenue… the problem, however, is that time passes, and if there is no renewal, a buyer must be found.”

YouTube has new features to try. Here's how to use them

December 26, 2020
Check Also
Close
Featured Posts
Which One Is Better? Chiminea Or Fire Pit
7 days ago